It’s a miracle that we actually managed to review Suikoden IV in time for the ‘Summer of Suikoden’ fan-led event that’s currently pulling together to celebrate the series legacy and to try and convince Konami to release the remaining games onto PlayStation Network (or perhaps reopen the series for new instalments), what with the release of the game on digital services in Europe being plagued with an error that meant that the game wouldn’t load and after being pulled from PSN a complete delete and reload of the reissued game was necessary. Luckily we were able to pull our PlayStation 2 out of retirement and boot up the original disc to get the game going instead.

Suikoden IV is considered by many fans of the series to be the ‘worst’ one. This is usually down to three major issues; the frankly horrible method the game employs for steering its boats, the high encounter rate and the fact that the plot of the game sags in the middle after a strong start. It’s probably worth admitting immediately that yes, this is the worst instalment in the series, but it’s a series made up of excessive highs and as such a low point is still well worth your time and attention, especially if you’re a fan of the series as a whole.

Graphically, this title is an improvement on Suikoden III in terms of texture mapping and character models, though there are still issues with this series’ transition into 3D. On this occasion the models can be more than a little ‘marionette-like’ in their movements and the voiceless lead can come across as fixed into either blissful ignorance or a permanent scowl in terms of expression. A darker, more realistic colour palette also takes the game further from the vibrant designs seen in the past. The camera is placed into player hands for the first time and this does now handle quite well (assuming you don’t like to invert it for your usual play style, as that is not an option here) and the new character artwork is nicely drawn in an anime style. Water, which is the navel setting’s main theme, looks very good and moves convincingly, especially at sea, and some of the small combat animations look extremely fluid. In context for the games around the release of this title at the time however, it is graphically lacking in punch.

Three games of a running gag finally gets a pay off with the introduction of Reinbach the Third!

In terms of audio this is possibly the series’ weakest moment. There’s very little that stands out in the games soundtrack, with even the recurring themes for the series being weaker and less bombastic than they have been in the past. Sound effects manage to be effortlessly tactile, bringing battles to life, but some repeat extremely often and these can be repetitive in nature. The sound of walking around in armour at the games outset is enough to make you glad when he’s stripped of his rank and given a new civilian outfit for example. Dialogue is the biggest weakness however, with some very impressive vocal performances having to rub shoulders with drab one-liners or misplaced casting. When the voice work is good on Suikoden IV it’s of a very high quality, but at times it can feel sub-par. 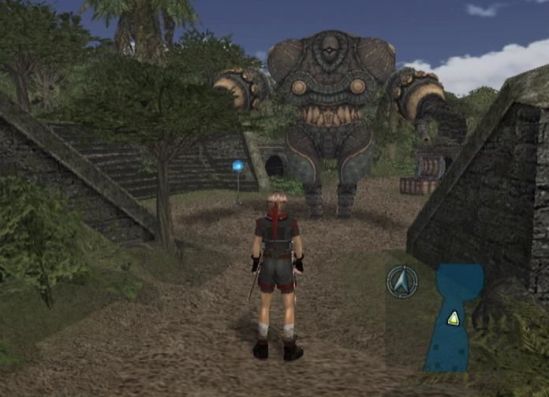 A muted colour scheme is offset by great art direction for the time of release.

Set significantly (roughly 150 years) before the first Suikoden game in the series timeline (and as such it’s the first entry not to include a save-game import), you take on the role of a nameless protagonist who is in training to become a knight of Razril. These knights patrol the seas in mighty ships and are the island nations defence against a sizable pirate armada. Befriended by the high-born but similarly training Snowe, you both pass through your examination alongside a small group of colourful characters and quickly set about the day to day duties that await you. Unfortunately a chance encounter with an infamous pirate captains leads to our protagonist becoming infected with one of the 27 True Runes, in this case the Rune of Punishment, that gives great destructive power but drains the life of its host rather than bestowing immortality as we’ve seen the other True Runes do in the past. Things go from bad to worse, and before you know it you’re exiled from Razril and heading out into unknown waters. It’s an exceedingly strong start that sets the scene well and builds the usual blend of politics and fantasy adventure we have come to expect from the series. Sadly this is at time undermined by the vocal performances of some of its cast, that can sound uninterested and wildly out of scene at times. Playing the game on mute does allow the script to better shine, and the writing in this case, at least at the game’s opening and closing if not its overall pacing, is well handled. 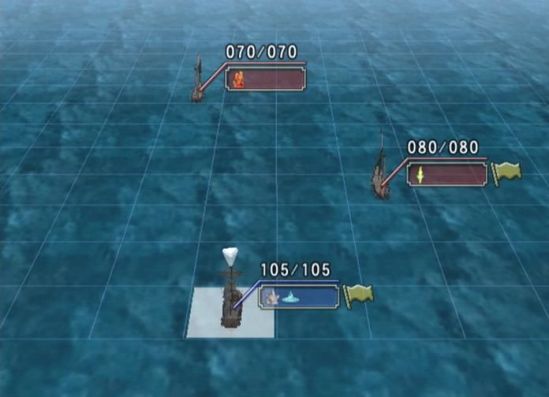 Gameplay has always been a major strong suit for the Suikoden series and in terms of what’s on offer here there’s a lot to love. Naval battles replace the tactical board-game style of combat introduced for large scale skirmishes in Suikoden III and it feels fantastic when played. Essentially taking grid based combat and adding layers of consideration such as the direction you’re facing to fire (ships fire broadside after all), boarding parties, elemental canon damage and crew assignations on-board ship to best counter the enemy. It’s a brilliant little system that’s truly enjoyable and surprisingly robust. Exploration and uncovering all of the Stars of Destiny is relatively unchanged in comparison, though the strict limit on inventory space has been removed to make item collection easier and the system for enchanting/leveling weapons as seen in the first title makes a comeback completely unchanged from how it worked in that title. Runes still act as magical items to unlock spells, and these are limited to where on the body they are placed and who can equip into which slots, which is a common approach to them for the series and continues to hold up well, allowing for a level of flexibility in most character builds. The game’s party size has taken a large culling however, dropping to just four active members at any time. This does make combat quicker, but allows for less of the cast to feature prominently in your team and makes the combat feel more like a ‘generic’ 2000s RPG. The games cast doesn’t feel as fleshed out on the whole as past entries, which does damage your decision making when it comes time to build a party, and with the continued presence of combination moves between characters there’s a strong chance that these will be the deciding factor on who makes the cut. Ultimately the biggest issues lie in the games pacing, which is indeed fairly padded by long journey times at sea and a high encounter rate, these condense down with the reduced combat system to make some stretches of the mid-game feel like a lot of hard work for relatively small reward. Perseverance will reap benefits however, and some of the games small touches (such as NPC interaction unlocking information/items/hints) help to keep the game feeling polished in the face of these changes. Travelling by ship can take a while to get used to due to a control scheme that uses both analogue sticks, but once the player discovers that momentum can be maintained with a shoulder button it begins to feel more natural. Duels are arguably at their strongest to date here, with the rock/paper/scissors mechanic given excellent dramatic tension with inter-character banter and dynamic angles on the action. There’s a strong cinematic feel to the game in general in fact, that is most present in the regular (and unskippable) cutscenes that showcase excellent direction. 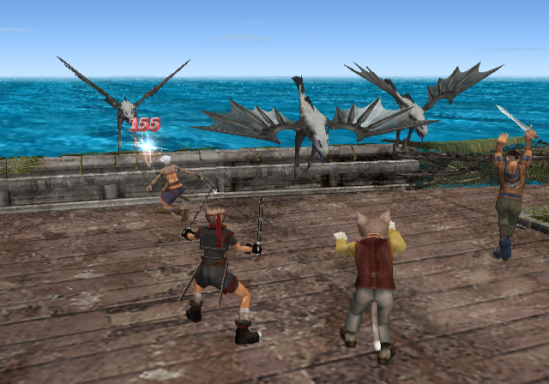 Combat is fast paced but has a reduced party size.

Overall, Suikoden IV is a mixed bag. It never reaches the height of its predecessors but it’s never a bad game. In terms of length, depth and systems it shares a lot of common elements with the original Suikoden and that’s not inherently a bad thing. One could argue that it’s a response to the deviations from the original systems on the part of Konami after taking feedback on Suikoden III. Ultimately however it’s worth a play if you enjoy an RPG that has some charm, a good heart and a ton of battles to overcome. In all honesty this is a title that would be perfect for a mobile adaption, with its brisk battles and high encounter rate being perfectly suited to ‘casual’ play, but strung around a lengthy and complete campaign. The game has a breezy, free-flowing feel that matches its naval overtones and sets a brilliantly different environment in its island locations to other games of the period. With the digital release now fixed and available on PSN again we can but hope that others will come to appreciate its charms.