Who would have thought as little as ten years ago that the most commonly used handheld would be a mobile phone? Casting our minds back that far seems like a foreign country, I was a student when the Sony PSP was announced alongside the Nintendo DS and at that time the hype was huge. I was sharing a house with two hardcore Sony players, a casual Nintendo fan and one other person (more on him later) and talk about these two handhelds was rife that week. Both sides were trying to sell me on their brand and I will be honest and admit that the PSP had the bulk of my attention with its promise of allowing me to play Playstation classics like ‘Final Fantasy VII’ on the go. The DS felt a little like a game-and-watch to me with a shoe-horned ‘touch’ gimmick and a microphone that I just knew would get almost zero use. Ultimately in hindsight the DS would probably be the better remembered handheld (although I was right about the mic!) and I ended up owning both handhelds eventually. Interestingly while I still use the PSP from time to time the DS hasn’t seen a lick of action since I started playing games on my phone as well. 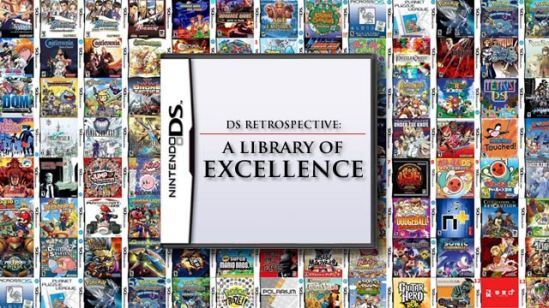 A lofty claim from Nintendo but not wrong.

It was the odd-man-out in the house that was the most alien to these concepts. He was rocking an N-Gage and insisted that it was the way forward, going as far as to predict that as a handheld it was going to out sell everything else on the market. He had a lot more cash to burn than we did and for the selling price to game quality of the N-Gage we were dubious, although their announcement showing at E3 had been something of a joke that year. For the uninitiated, the N-Gage was a fusion of mobile phone and handheld game platform released by Nokia. It failed spectacularly due to there being a severely limited range to titles available for it, a massive price tag, and its inability to function properly as a handheld or a phone half of the time. The thing was a blocky mess of a device and history would show that it failed spectacularly. That said it was the first device to be mixing real games with mobile functionality. Everything before its launch was roughly the quality of ‘snake’ where you’d watch pixels dance across your screen and press number keys to get a d-pad of some kind working. I can remember that he used ‘Pocket Kingdoms’ to try and convince me of his argument, a title which was actually extremely good. Pocket Kingdoms was based on the foundations of a Sega Saturn title named ‘Dragon Force’ and was essentially about defending your castle from attack from other players and crafting thousands of items to equip the different unit types with. Features such as in-game chat, trade and attacking made it the earliest mobile MMORPG, or as I like to think of them ‘Social RPGs’. The concept was interesting to me, but due to the extremely limited user base online play was almost impossible so the single player offline campaign was all I could test out. At the time I can remember thinking it would have found a better home on PC using something like Facebook (which also didn’t have ‘games’ as we know them today running through it at the time and was still relatively new). The pair would have been a perfect fit.

By all accounts the worst handheld ever.

So looking at the Handheld market of the time being so affluent and the joke that was Mobile gaming, we’d never have predicted that most people would be converted to casual gamers via their phones by 2015. Today we inhabit a period where a whole generation has grown up with access to the internet and gaming for most of their life. When teaching a Media lesson on gaming history I was explaining the importance of the Sega Dreamcast as a milestone in console gaming because it gave us the first built-in modem and featured games such as ‘Phantasy Star Online’ which made four way player parties possible over huge distances. One student asked me what a modem was whilst another was appalled that a console wouldn’t come with wireless networking straight out of the box as standard. I went on to explain that the world was a very different place at that time, with the internet being far less of a gaming tool and certainly a lot less productive than it is today. Playing them the dial-up noise was a particular pleasure, as was showing them what a Geocities site looked like. In an average lesson I’ll have to remind all of them that their phones should be off and in their bags/pockets before I begin a lecture, and usually I’d catch at least one student trying to sneak in a cheeky session of Bejeweled or Angry Birds whilst ‘multi-tasking’.

Mobile games are a big business these days, and indeed it looks like Nintendo is about to start making the shift to the app store as sales of the 3Ds begin to dwindle. Whilst console big-boys such as Sony and Microsoft are all about drafting the triple-A experience with the best sound, visuals and explosions money can buy, Nintendo has always appealed to the casual gamer first and foremost. This wasn’t always the case, but from the Wii and up their games have taken on a more family friendly and casual tone that most people can find cheaper and just as well developed on the App store. Now games such as ‘The Legend of Zelda’ and the next big ‘Mario’ or ‘Metroid’ title will always be able to convince their players to come back to their consoles, but aside from these tent-pole franchises their handheld market is dwindling. At the time of writing Pokémon apps are starting to appear in the App store and the 3Ds just received its first game with serious in-app purchases as well as a Mario flavored port of match-3 mobile darling ‘Puzzle and Dragons’. Nintendo as a brand seems to be making a shaky entry into this period and it’s all because of the Mobile Market. This brings up issues of if it’s fair to include such an experience on a handheld that cost you a lot of money to buy and came packaged at full price compared to a freemium game.

And why not? Games for mobile are big business and people can make a lot of money developing a hit that takes relatively tiny teams and production costs when compared to a console game. True, mobiles aren’t making the next ‘Dragon Age’ or ‘Mass Effect’, although games such as ‘the Shadow Sun’ are certainly trying to. Worse some titles are already being rendered unplayable by updates to operating systems, as those who purchased ‘The World Ends with You’ were angered to discover recently. True epics are the domain of the console, but anything up to the Playstation 2 era is fair game now. SquareEnix ported ‘Dragon Quest VIII’ across with a huge degree of success in 2014 and that opens the doors to all kinds of exciting possibilities, especially when you consider that mobile gaming is almost always on an internet ready device. It’s not unreasonable to assume that mobile gaming will maintain pace with the console market at the current rate, always pushing to be a version behind.