Developed by EA to promote the release of ‘Dragon Age: Origins’, this Flash based browser game allowed players to learn about details of the world setting and experience some elements of the big-budget title for free in the months leading up to its release.

No a throw-away tie-in, Journeys is designed to allow you to log into the game using your BioWare or EA account and through completing various tasks in-game a player can unlock items for use in the main title that (until BioWare spoilt all of its players one Christmas Eve by letting anybody who logged on to their site unlock all the pre-order bonuses and added extras for Dragon Age I and II with a single mouse click) couldn’t be found anywhere else. Whilst not massively useful items for the end-game, this cross-pollination between browser and console title allowed for more advanced use in the future, with ‘Dragon Age: Inquisition’ making massive use of an online ‘Tapestry’ to record player progress through both previous games when making the shift onto next-generation consoles, keeping player choices and narratives intact. For all of this you could forgive Journeys being a half-arsed tie-in, but it actually manages to hold up rather well on its own.

Graphically the game uses a 2D artwork style typical of Flash games at the time to recreate the clothing designs and location of the ‘Deep Roads’ as seen in its bigger brother. In this regard the game is an excellent reflection of the console title, with new characters garbed in the same outfits and carrying 2D representations of the weapons that player avatars were wielding at the time. The games HUD also makes effort to stick with the feel of that edition, with character portraits and their HP/MP readouts posted in the same manner on the top left hand side of the screen. Animations are smooth, if a little uninteresting on the whole, and for a game built entirely in Flash the production values are extremely high.

Being able to take advantage of a PC or Mac system to play sound and music rather than being tied to a handheld or retro console enables the game to take full advantage of the effects and score used in the full version. This immediately makes the game feel more visceral and sets it firmly in that universe in seconds of loading the page, but can clash a little with the 2D artwork in places as more comedy effects for flashes of stylised lightning would have been expected.

The games story follows the player in a self-created role as he or she makes progress through three chapters for reasons relating to the ‘origin’ or your distinct character build. The party starts in Orzammar, city of the Dwarves and the Darkspawn infested Deep Roads. Here the protagonist narrowly avoids being killed by a high level enemy group and is healed by a Spirit Healer named Ardum before venturing out in search of a Warden by the name of Martine. Subsequent chapters (2 and 3) were in development for the game but never got released, the intention being to drop them as purchased content to further unlock treats for the main title but the concept was dropped in favour or inputting that content directly into the game itself. As it stands the story is a one-act, self-contained drama that does see a resolution and occurs concurrently if not slightly before the main player’s party arrives as the Dwarven capitol in Origins. 3 items and 5 achievements are unlockable, with one being given for completion of the chapter. 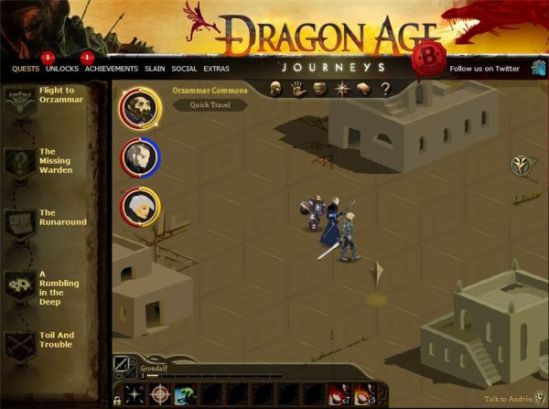 Note the achievements and unlocks on the left for your EA or Bioware account.

Gameplay is described by EA as ‘tactical’ with the player moving primarily through mouse-clicking in the format of a graphic adventure title (such as the ‘Monkey Island’ series from LucasArts) and allowing for players to explore, shop for items and speak to NPCs in this manner before switching to a hex-based grid for combat. Combat is turn based and similar to traditional Tactical battle systems, with the addition of characters being able to have two distinct weapon setups equipped at a time that can be freely switched between. In this manner allowing for ranged weapons to be used to pepper an approaching monster before swapping to a close combat setup to engage them on arrival. Characters each have special moves with their own mana pools and health totals, with class skills to match their personalities. Featuring a large multi-floor dungeon to explore as well as a chunk of city, there’s a sense of scale to this smaller title that is befitting of an entry into the series that it was spawned to advertise and player’s won’t be disappointed.

Character creation is almost identical to that seen in Origins.

As a game developed as a form on online marketing for a console title, Dragon Age Journeys shows a massive step forward in Bioware’s thinking that would later be repeated with the release of a Facebook game devised to rouse interest in Dragon Age 2. Sadly not playable online at the time of writing this review (though the website is still live, meaning it may be fixed in the future) it looks like Journeys is a title that players only managed to enjoy for a short while.