On paper, Monolisk is a perfect fit for mobile, with endless user-created dungeons that can keep you dungeon crawling for years to come. In practice it’s a little bit of a shallow experience that may have mistaken ‘streamlined’ for ‘dull’.

Developed by Trickster Arts, who have also produced ‘Hackers’ and ‘Hero of Many’, Monolisk is the work of a small team of very talented people who have clearly put a lot of time and effort into polishing what is presented in the game into a smooth experience.

Graphically the game utilises a 3D area that’s viewable from a top down angle from one of four overhead perspectives. Player character models initially seem very bland, though five classes are presented they each have a blank-faced un-textured appearance that is a little disconnecting for the player. This does alter a little through play (and loot) which has a visual effect on your character when equipped and adds to the doll-like feel of your avatars. Levels are also a little visually sparse, with the same basic pieces re-skinned to make the construction process easier, but featuring very little by way of skin-specific assets to make them pop. At launch it’s a basic snow, fire, stone, styled set that does encapsulate the generic RPG pattern of locations but does nothing to make the game stand out. Menus can be fiddly, and occasionally buttons feel a little small for a mobile release – with tablets perhaps being the main design focus.

Musically, Monolisk has a lot in common with Dragon Age II in terms of tone and composition. Heavily drum led pieces that feature vocals give it a haunted but racy vibe that plays in its favour, occasionally spilling into an Asian feel when stringed instruments are introduced before swapping back to solid western sword and sorcery tropes. Sound effects are a little drab in comparison and do suffer from feeling very much like stock, undermining the overall quality of the package.

There’s no narrative to Monolisk, which is a shame as there’s a lot of potential in the idea of infinite worlds (referred to as Shards, which has a heavy implication that there’s more going on) tied together by some kind of nexus. The faceless puppets you play with are possessing of classes such as Warrior, Hunter, Shadow (Ninja), Mage and Artificer (Hammer guy), but never get any kind of explanation of character development. The game does start you out in a tutorial shard that has some text, but it’s exceedingly vague by design. 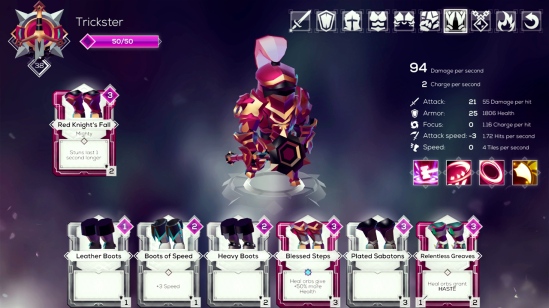 Gameplay is modelled on the concept of being a fun dungeon dive title for mobile, and at this it succeeds. You’re a tap away from being presented with a selection of level-matched locations to explore and pillage for points that can be used to pull from a gattcha-style system to add new gear, skills (fired off from a cool down meter when in dungeon) and assets for shard building to your pool of options. These control by tapping where you want to go and on what you want to inspect/attack. At launch that amounts to breakable objects, chests (containing said points) and monsters. The levels you play are all user-created and you’re prompted to rate them at the end of each dive, which does lead to infinite replayability. The meat of the game sits in the creation of your own levels, which bolsters the streamlined gameplay somewhat. You earn shards, which each have their own size, dictating the size of the level you can create. These range from tiny to huge and can limit the ambition of some creators straight out of the gate. Pairing these with a theme (read ‘level skin’) gives you the level base you need to start filling in the spaces one square at a time, dragging your finger to make paths, tapping in monsters you have collected and peppering the location with rewards before publishing it for other players to run through. It’s a tad fiddly (one finger will lay or delete depending on your option whilst two moves the screen around, which can lead to mistakes) but it’s functional and the game has the sense to insist that players can complete their own dungeons before publication.

Overall, Monolisk does suffer from being a bit of a shallow experience. The dungeon diving is fluid and fun at first but soon becomes repetitive over several consecutive missions, and the dungeon creation system lacks the tools for budding DMs to create their own mini narratives. It’s a massive shame as extended play feels impossible with the current build of the game, but the idea behind it; mixing ‘Diablo’ with and endless amount of dungeons and content creation tools, feels solid. The high prices and unpredictability of the gattcha system are what really cut the legs out from under this title. A marketplace where you could save points to buy specific elements for dungeons or armour would have given people an element of choice and foresight for the games future that it just doesn’t have at the moment, and the same people who will really want to sink into this game are those players who like to create something specific and work toward that goal.