At one time the name Langrisser was a serious competitor with Fire Emblem and Shining Force in Japan. Five solid entries spanning from the Mega Drive (where it was renamed as ‘Warsong’ for western release) to the Sega Saturn era abruptly ended for the series to go dormant only to make an unexpected appearance on mobile devices in 2019.

In truth Langrisser never really went away, it’s been kept alive by a constant stream of remakes and side titles that include systems such as the Dreamcast and 3DS, but the main-line series has taken an extended hiatus. Langrisser always made a conscious effort to maintain a main-line chronology that flowed between titles (retrospectively pulling earlier non-langrisser games from the same studio into its continuity), so it’s especially exciting to see that Langrisser for mobile is a direct continuation of this. We only legitimately got the original game here in the west, so it’s a great opportunity to rediscover a classic franchise.

Graphically there’s a lot of care and attention that has gone into this title. Animations are fluid and there are no re-used assets from previous titles, this is scratch-made 2D gameplay from the ground up. Every character, monster and environment is rendered in high definition and has a visual presence that does justice to their larger character portraits. Backgrounds for battles are particularly well designed, with varied environments and assets between locations. Menus throughout are expertly animated and fluid to use with a finger or thumb, with transitions between them (such as displaying a character’s movement range when clicked) given equal attention to how they animate. It’s all produced under a Shonen Manga style that plays into the series anime aesthetic. This is fantasy in a style very similar to ‘Record of Lodoss War’ rather than the muddy browns of ‘Lord of the Rings’.

A pleasant surprise was that the game came with both an English and Japanese vocal track, which the player can freely switch between through an in-game menu. The voicework on display here is of a pleasing quality in either language, though does lean into the melodramatic in presentation. Sound effects are solid and crisp, working well through headphones or the speakers of your mobile of choice, though perhaps the music (which is fun but forgettable) is a little too loud in the mix to fully enjoy either to their maximum potential. 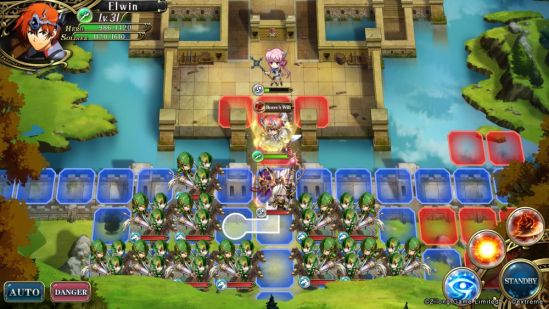 The story follows three young teens who rally together when one of their number inadvertently becomes the host for a goddess and setting off in search of a mystical weapon for good known as the Langrisser. The story dives readily into the balance between good and evil and puts heavy narrative value on two blades, mirroring each other in power on the side of good and evil, and from the outset the central trio are designed to be likable. Unfortunately, there’s also the necessity to set up the games gattcha systems, and so a narrative device is also introduced to keep a revolving rosta of heroes from previous titles in the series dropping in and out of the plot that takes away from the strength of the original trio’s character arc. As a mobile game designed to run for years, there’s no end in sight for the plot, so don’t go in expecting closure to this main arc. The upside however is the addition of a mode where you can dive through key beats and battles from previous titles, digesting the stories of games never officially translated. 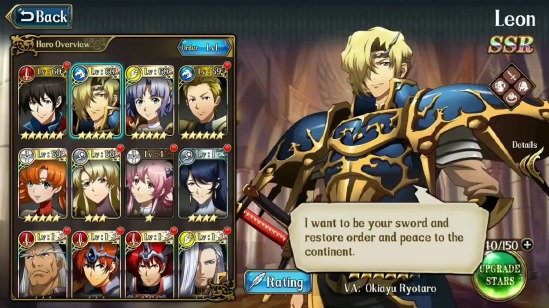 Gameplay is very traditional Tactical RPG fayre, with rounds dedicated to sides moving their whole army on a large square grid. Units consist of a hero and a group of surrounding warriors that act as one entity, essentially adding a barrier life-bar to that of each hero and some bonus attack points to keep things moving quickly. Every unit in the game falls into one of three types that enters a rock/paper/scissors style contest for strengths and weaknesses that’s par for the course in games of this type. Winning a battle nets rewards such as gold, player experience and unit experience as well as items to equip to your heroes and rarer tokens for random hero pulls from the games gattcha system. Heroes can’t be a higher level than the player’s account, meaning you will need to fight regularly, take on mini quests and grind to stay ahead of the plot’s difficulty curve. The plot taking the form of an expanding world map with plot encounters each time you unlock and reach a new town or city. This visual representation of the world does an excellent job in charting both player progress and keeping things feeling in-world as you play, though tabs for arena fights with other players, special events and other in-game grinds appear on the right of the screen without a great deal of narrative explanation as to why they aren’t physically on the map where they were originally encountered and unlocked. Where the game shines is in its class and progression systems, with players able to dedicate themselves to a character (we advise a SSR class one as they are default better in all ways to R status characters) and unlock new class skills, advanced classes, craft weapons, new troops for their brigade and more. It’s easy to be bogged down by the amount you can do on every character you unlock, and we strongly recommend dedicating yourself to the team you plan to use throughout your adventure.

Overall there’s a lot to enjoy with Langrisser, however it’s a game that does get bogged down in its own ambition to try and take out Nintendo’s Tactics RPG heavy hitter in Fire Emblem Heroes. Advertising before launch was aimed at pushing the things it had over the rival title, and loudly proclaiming bigger maps and other features that lead to immediate comparisons between the two games at launch. Unfortunately the game does fall short of FEHeroes in a few ways, most importantly in that Langresser struggles to streamline its systems and instead has a multitude of currencies and mini tutorials for players to wrap their heads around, and these need to be used or the player will eventually hit a wall they can’t grind past. Whilst Langrisser isn’t the all-conquering king of the mobile space, it is a solid game with great potential, and for the low cost of free it’s certainly easy to recommend a download to test it out for yourself.