For many the most fun to be had in any ‘Legend of Zelda’ game is when the hook shot item comes into play. Legend of the Skyfish takes this idea and runs with it, and its developer, Mgaia makes the most of the concept.

Published by Crescent Moon Games, Legend of the Skyfish is an Action RPG with a puzzler at its heart. Yes there’s a significant amount of action and the occasional boss battle, but individual stages are structured to test the player’s skill with the title’s fishing-rod hook over martial prowess. Mgaia (short for Mother Gaia) haven’t made a massive footprint in the RPG scene up to now, but this partnership with Crescent Moon as publisher for their work and a back-catalogue of solid mobile games in other genres promises big things for the future.

Graphically the title looks fantastic and has a very clean graphical look. Sprites are illustrated in 2D in a manner similar to that of a collage, and environments have enough texture to feel tactile without ever crossing into photo-realism. It has an overall European comic book aesthetic that gives the game the feel of a modern fairy tale. The title does suffer a little from an overall lack of variety in enemy types and locations, but each is distinct from its peers and has its own animations to set it apart. The title’s user display and layout is well spaced and friendly to being held in landscape mode without causing errors that could potentially harm the player, but fingers can occasionally slip away from the left hand movement icon due to its size, causing the player character to move in random directions at odd times.

The story is established in a nice opening sequence.

Music in this game is full of energy and well-orchestrated, with the world map theme feeling like the background music to a pirate adventure film. In contrast the title screen features silence and the distant sound of waves lapping on a shore to give the game well-deserved flavour. Sound effects have an arcade-like feel to them, with the main character making little noises as he attacks, casts his line and swings his rod amongst other actions. It may be wearing its Zelda aspirations on its sleeve, but there’s no denying that these simple touches add a whole lot of charm and energy to an otherwise mute protagonist.

The narrative of the game is a simple yet effective story. The waters of the world rose and swallowed much of the land, causing a sprawling world to be separated into a series of islands where once a great land mass resided. Along with the floods came the monsters, who have taken root throughout this new world and are a constant source of woe. The reason for this? The fishermen of your community harvested too deep and woke an ancient evil that is taking its revenge. You are separated from your brother and left for dead when a benevolent spirit finds and saves you, handing you a fishing rod and setting you on your journey to recover your sibling and prevent the evil Skyfish from flooding the world. The story is told well through an opening cinematic before the game falls mute, preferring to show rather than tell as the world expands and you learn new things. This method of storytelling works well and allows for the characters to grow on your without the need for lengthy pauses in action-driven gameplay for debate or speculation.

Gameplay can feel slippery at times and encourages multitasking.

As gameplay goes, Action RPGs are made or broken by how fluidly they control. Legend of the Skyfish uses a duel-analogue stick setup where right and left icons function as virtual buttons, the left to provide movement and the right to guide your rod’s line. A secondary right hand button acts as ‘attack’ and swings your fishing rod for close-combat damage. For the most part it is a very smooth playing experience, though there are some moments in the thick of the action where multitasking between fighting and reeling out your line can become fiddly and your fingers slip around the screen. Nothing excessive, and nothing that damages the experience overall. You control your character from a top-down perspective and can find hidden chests along the way (guided by a bumble-bee like character who is a direct nod to Navi) that are smashable for gear upgrades (the game has an armour, line and rod slot and you can select what gear to bring between levels, though strictly speaking newer is always better) your ally conversing with you with a series of simple icons rather than dialogue. Monsters have a variety of patterns and behaviours you’ll quickly get to know, and the rod makes for an effective weapon, whilst sending out your line can hook items closer to you or drag you toward them if they are fixed. Most of the games puzzles involve this mechanic and many mix it in amongst timing based trials such as hopping between moving platforms or across spikes while under enemy fire. Each level ends with a statue which must be broken to free the zone, and each area of the linear world map ends with a boss encounter which will test what you’ve learned so far. 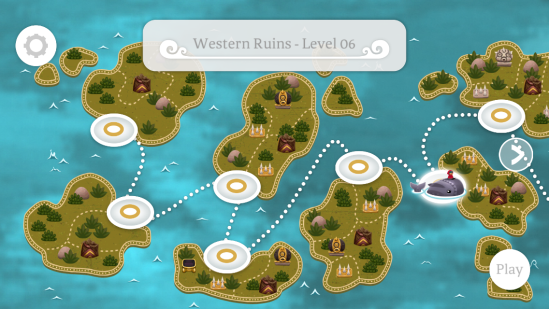 The world is linear but expands as you play further into the game.

Legend of the Skyfish is a fun title to play, with short levels making for quick play breaks that can be strung together into longer sessions. It’s not a meaty RPG with particularly deep mechanics, but the game moves along at a brisk pace, provides a good level of challenge to fun ratio and never feels drawn out. It won’t please people looking for a deep narrative, but we found the experience immensely enjoyable and the art direction massively charming. Recently a free to play edition of this title was released, allowing players unsure of if they wanted to sink the full price of asking for the title up-front to take it for a test drive.