It would be very easy for people to glance at the Wave Light Games catalogue and assume that Strike Team Hydra is just a simple reskin of their excellent ‘Demon’s Rise’ series with a Science Fiction coat of paint. If this were the case it would still be worth your time, as the Demon’s Rise games are some of the best tactical games on mobile at the moment (and hey, it worked for Games Workshop with ‘Warhammer 40K’), but Strike Team Hydra is so much more than that. 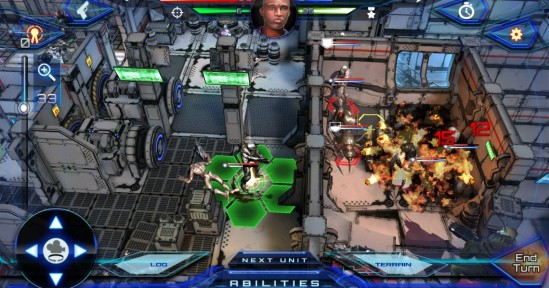 First and foremost, yes this game is built on the Demon’s Rise engine but it’s been completely overhauled in order to better fit the structure of the science fiction premise. It’s also already seen support post-launch to deal with many of the gripes MBU had with previous titles (sound and music have no faults technically, and the UI has been considerably streamlined) with more patches to come. Wave Light Games are bringing their usual level of polish to the title and trying to elevate their engine and production values to the next level with this game – and it shows.

Visually, this is one of the best looking titles available on a mobile device today. Full 3D, detailed character models with good lighting and textures show off a level of polish that’s rarely seen for smaller studios, and there’s an insane amount of work that’s gone into building environments and character design. The game does have a marginally ‘Mass Effect’ or ‘Star Trek’ feel over grimier takes on the future as seen in ‘Aliens’ or the aforementioned ‘Warhammer 40,000’ but it doesn’t feel like it’s directly lifting from these, filtering itself into something approachable but unique. The User Interface was already an improvement on the slightly cramped original pre-patch, but post-update it’s streamlined wonderfully. Occasionally there’s an over-abundance of things on the screen to take in at a glance, but the game is never ugly and always allows complete camera control. If you want to zoom out to see everything from above that power is in your hands, whilst also enabling you to get extremely close and view every detail of a character model.

Sound effects are serviceable and help to build a good sense of atmosphere, never jarring you out of a battle but not standing out too far either. Music on the other hand is very well implemented and one of the biggest things to set this game apart from its sibling games, with a totally different tone and sense of implementation. Both can be manipulated in the options menu to your tastes, and show no trace of the mystery bug that hobbled out score for Demon’s Rise 2.

In terms of narrative, the game does borrow a few clichés over the course of its run, but it does so in the spirit of fun. Strike Team Hydra is initially assembled and dispatched to explore a large, vacant vessel that’s drifted into known space and isn’t responding to attempts at communication. One of multiple squads sent in to find out what happened onboard, the player is given information before each mission in an almost Starcraft-like manner, with large portraits outlining mission briefings. It works very well, and operates around the fact that the player can draft his/her squad from a larger pool, enabling the story to always use abstract ‘team’ terms rather than personal pronouns. 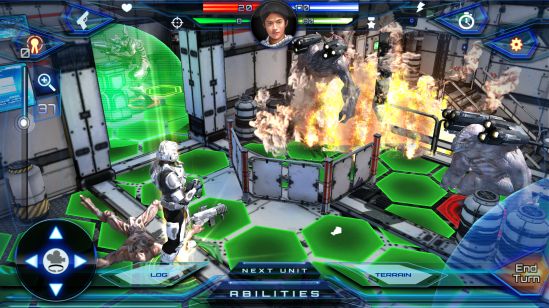 The UI is a massive step up from previous games.

Gameplay is a turn based affair with the player selecting a team of individuals that ranges from the usual group of snipers, tanks and psychic powers to robots and aliens. Based on a hexagonal grid, characters can move, shoot and activate personalised abilities that builds experience and enables you to further personalise the team with items both won on the field of battle and purchased outside of combat. Though the game includes a tutorial that’s good for those not used to this play style, it doesn’t do a great job of letting the player know some of the games finer details. The fact that the team can be swapped in and out with the pool of unused characters, items and experience intact, is a massive advantage when attempting to try different tactics or tailor build a squad for a specific mission. Bodies of slain enemies do have a tendency to litter the field, making navigation difficult at times, but this is set to be addressed in future updates. If you are at all familiar with the concept of a tabletop wargame or a Tactical RPG then playing this game will come very naturally to you. Outside of the main mission arc there are optional missions that can be engaged for character grinding and handy loot, of which the game features an abundance. 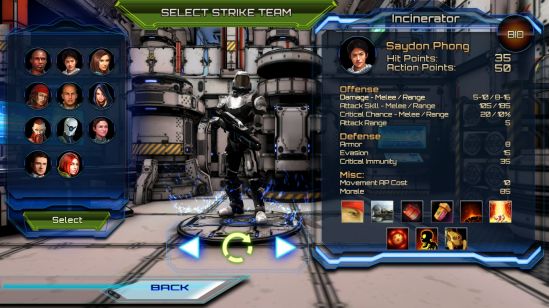 The level of graphical detail is amazing.

Overall, there’s very little to fault in Strike Team Hydra. It shows a great deal of dedication on the part of the development team, and aside from wanting to see a little more variety in locations and more of this futuristic universe, there aren’t many things that could be added to improve this title. It feels like a console quality AAA game played in the palm of your hand. We look forward to seeing what Wave Light Games does next.