The official sequel game to Record of Agarest War turns in the old engine and builds a whole new game from scratch. One that whilst claiming to be a Tactical RPG has more in common with a conventional Turn Based system.

Despite polarising gamers between those who adore and those who cannot stand the Agarest series, it produced enough sales for a new title to be financially viable. Idea Factory is clearly seeking to target a more mainstream audience with this title, which blends their usual themes for the series with more traditional mechanics. Unconnected to the other titles, though you can import a cleared save data from Agarest: Zero for some bonuses, it stands apart from its peers.

Graphically this title uses the same 3D backgrounds with 2D sprites style as its forbearers, but brings a HD quality and sharpness to the visuals that was often lacking before. Sprites animate fluidly and are well designed, with character portraits showing off details and featuring smooth animation. There’s still slowdown when loading new areas and handling crowds, which really shouldn’t be occurring given the scenes don’t contain enough to tax most modern systems, and loading times can be annoyingly long. Menu design is wonderful however, and the visual flourishes on these elevates the quality of the production throughout.

Sound and music continue a trend for good design sense, and though the soundtrack is a little less memorable than previous instalments, the sounds are crisp and well recorded, showcasing a range of noises and effects that makes battles feel like they carry real weight. There’s less attention to the sound effects in conversation sequences this time, which don’t rise to the same heights as Record of Agarest War: Zero. 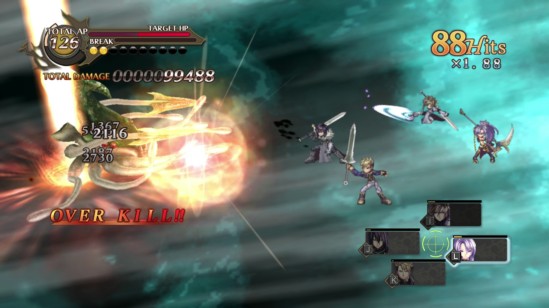 Juggling enemies with attacks is the key here.

The story deals in a slightly darker tone than previous entries into the series to date, seeing the game open on its initial protagonist (a swordsman named Weiss) as he slays a god in a fit of grief. The resulting fallout puts chaos into the world and causes him to lose his memory. Only later is he hunted down by a celestial agent by the name of Eva, so tells him he will have to become a Spirit Vessel and absorb the scattered remnants of the slain god into his bloodline in order to eventually resurrect him and bring balance to the world. Despite the heavy subject matter and the initial energy the storyline has, additional characters added to the party are somewhat more relaxed in their attitudes and design, making for lighter moments and themes throughout the games duration. Sadly some of the writing is weaker than past entries that turns certain characters into annoyances rather than equal members of your squad. Weiss is likable, especially given his early emotional breakdown and path to redemption, and the subject of which god Eva serves is a good mystery that shades her motivation. 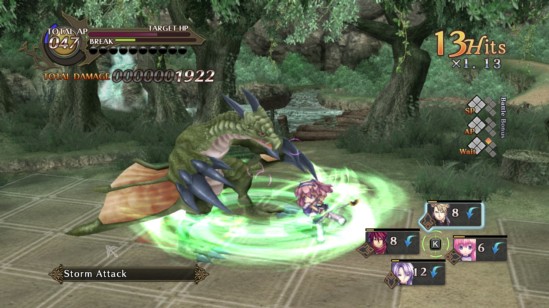 Combat is much faster.

Gameplay sees the dot-to-dot map exploration of the previous games expunged in favour or a three dimensional world map that is at first entirely empty. You as the player can search your surroundings for points of interest, but be warned, doing so reduced a finite pool of points that’s tough to replenish. Luckily the game does a good job of letting you know where you need to be spending these points to see out each generation properly. Towns are menu-styled and allow for the usual selection of shops and other goodies before jumping back outside again to explore. Combat is the real meat of the game and this sees each side of the battle arranged on a separate grid and slinging a mixture of spells, skills and attacks that juggles opponents into the air or slams them to the ground with force. Tactical positioning on this grid plays a slight role, but a larger component is building a decent stock of energy for characters and swapping them in and out mid-flow to chain together elemental attacks that will wipe out an opponent in one round. It’s satisfying and a little like the system as seen in ‘Valkyrie Profile’, but taken to an extreme. Luckily the crafting has been scaled back a little to make it more approachable in this new title, maintaining the series standard depth but allowing players to approach it in their own way, strengthening old weapons and forging new ones as needed. Some on the mini-games are . . . fluff. Titillation based on keeping some of the more risqué content of the past in an interactive format that sees you adjusting the temperature in a sauna, etc. These luckily don’t take up too much time. 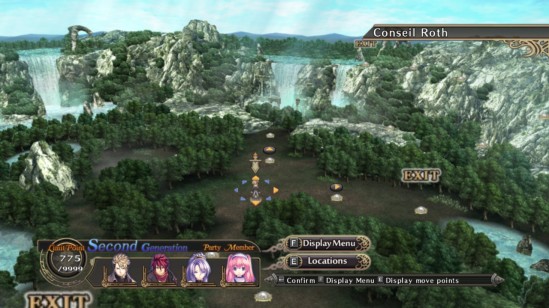 Overall, there’s a lot of tedium in Agarest 2 that can make getting past the games early stages a bore. It’s a hurdle that many players won’t make it past, with many crumbling under the games unreasonably large file size, slowdown, loading times and sub-systems. Getting past that hump however will open up an enjoyable experience. We recommend that if you see this title on sale you add it to your collection, but don’t seek it out at full price.