As if sensing the gap in the mobile market left by the tragic loss of ‘Avengers Alliance’ and its sequel, DC Legends springs onto the scene offering bite-sized super-heroics set within an alternate take on the DC Universe.

First and foremost, the question most people are going to ask is ‘is this as good as ‘Avengers Alliance’ and the answer lies somewhere between the highs of the original and the disappointment that was ‘Avengers Alliance 2’. DC Legends is a solid game but it’s not as standout as the original, whilst ticking many of the boxes its sequel failed to do. It’s similar enough to draw comparison whilst having elements of its own to take into account.

Visually the game is fully 3D with character models showing a high level of details and environments packed with details that will mean something to those with even a passing knowledge of the comicbook universe it draws from. The opening section on Oa, base of the Green Lantern Core, manages to highlight several key locations including the Book of Oa, Central Power Battery and conclave of the Guardians before shifting to Paradise Island for the next chapter. Visually it’s a little angular, in the style of the PlayStation 2 game trying to recreate high quality characters, but the overall package is very pretty and the DC characters have been redesigned for their alternate counterparts in interesting and sensible ways. 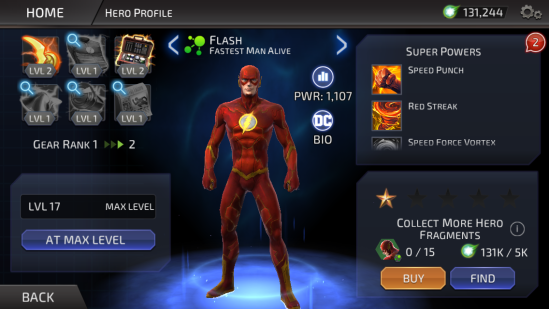 The Flash makes an early appearance.

Music and sound are solid, though nothing really makes the game stand out. Due to the low level of actions for each character in the early game you’ll hear a lot of repeated SFX throughout battles and groups of similar enemy types can repeat the same attack time after time. The title screen has a good solid theme in place however, which sets the tone of the game extremely well.

A high-point of the game is the structure of its plot, which strives to give us something fresh in a rapidly growing market of ‘alternate’ DC projects such as the MMORPG ‘DC Universe Online’ and brawler ‘Gods Among Us’. You start the game playing with long-time comic book heroine and magician Zatanna, brought to the planet Oa in the middle of a siege by the Manhunters (robots who moderated space before the Core) under the control of the Black Lantern’s power. Quickly allying herself with Hal Jordan and other famous heroes, you’ll repel the initial wave only to learn that Earth is the next target. Retelling the ‘Blackest Night’ arc in a new way is a clever move on the part of the developers because it employs an existing and understood global threat but removes the pre-existing plot-beats, leading to new story telling opportunities. Plot points come in the form of inter-character banter between battles and quickly become a highlight. Chapters themselves can feel short however, often leading to drawn out fights followed by all-too-brief ‘let’s go somewhere else’ calls, which brings the pacing down. 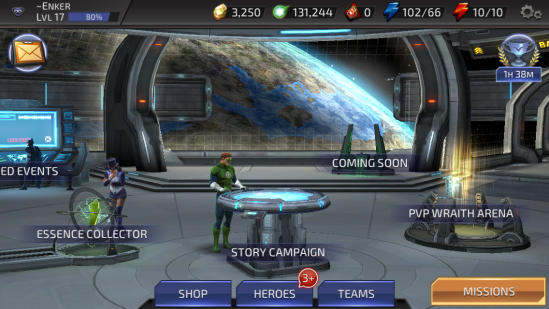 The JLA Watchtower acts as your home location.

Gameplay is firmly focused on combat with progression taking the form of chapters that make up a single location in the DCU and the player fighting across them in linear fashion before tackling a boss and moving on to a new one. It’s tried and tested, but does begin to feel stale when the plot backing it all up wavers. Luckily a great deal of satisfaction can come from building a team of DC heroes and villains, with the initial line-up focusing on current favourites and darlings from film and TV properties. You receive the Flash early on because his TV show is highly rated. Deadshot and Harley are quickly added to the team because Suicide Squad sold high at the box office, etc. There are however some characters, such as Zatanna and Shazam (Captain Marvel) who get excellent models and builds to help flesh out the roster. Battles are turn based and you bring a team of four heroes into a battle against multiple waves of opponents. Initially each hero has just one attack but levelling them will give you a secondary and then third option that usually cater well to that character’s strengths and weaknesses. Green Arrow can pepper enemies on-mass whilst superman is a tank in all respects. The Flash meanwhile powers up the unleashes stored up energy to deal multiple blows over a single turn. It’s not too complicated and there are far less status effects and conditions to take into account than one may expect, but there is some charm in the system and how its presented. Characters have big, flashy attack animations and it all runs at a good speed, with auto available as an option for those who want to grind the same fight a few times. Battles unlock a number of different currencies and player experience, with the player only able to level their team to the same rank as they are at any time. This is done by making use of a communal pool of experience for everyone, rather than individual characters. Each character can also rank-up by collecting multiples of that character’s tile to unlock new moves, and can have their basic equipment levelled with sets adding additional bonuses (for example Green Arrow has a quiver, bow, mask, etc). Collecting enough tiles of a character type you don’t possess unlocks them, and whilst there isn’t anywhere near to the total characters available when Alliance went offline, there is a good mix at launch. Special events can also be entered daily and unlock rare resources and items, as well as the occasional pestering from the games IAP to purchase packs of characters from time to time using real world money. It’s in this pestering and multi-resource system that the game shows its free to play weaknesses, but they can be worked around and difficulty spikes easily overcome. 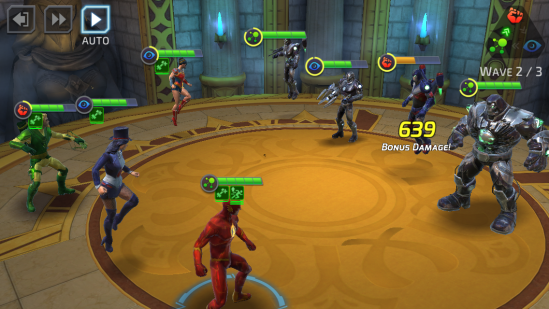 Battles are billed as ‘tactical’ but are essentially JRPG style turn based.

Overall, DC Legends is a solid, but not essential game to own on your phone. It takes up a chunk of space equivalent to stand alone premium titles and will only grow with updates, making it a prime candidate for a player to enjoy but delete when the next big RPG drops for mobile. Ultimately your love of this game will vary depending on your love of the source material, and we can only advise that you try it out for yourself since its free to download and take for a test drive.