The original Mine Quest from Tapps Games was a small but somewhat addictive little hybrid of Clicker and RPG that was something of a guilty pleasure. It wasn’t a very long game, but it somehow managed to squeeze a whole lot of exploration into a tiny file size. Its sequel seeks to outdo the original in every way but expanding on the experience exponentially.

Tapps Games has a frequent and high output of titles for both iOS and Android platforms that can sometimes recycle a little too much in order to push out the next game. Art assets, music and even whole reskinned titles (usually in the format of match 3 Puzzle games) with a new hook tagged onto them left MBU with low expectations for a sequel to Mine Quest. To our great surprise the title reuses nothing at all from the original, and is a very densely populated game with little space for filler.

Graphically the game uses 2D art of a western style that has a smoothly animated style. Unlike the first game you now see your character (a dwarf) in the field rather than simply tapping on rocks and monsters as his proxy and the little fellow dashes around on your command seamlessly. To better incorporate this shift the game is far more zoomed in to the action than it ever was before, though the player can choose to zoom out a little with a pinching action. Whilst rock types match those found in the first title, they have been redrawn in their entirety to better hold up to such close inspection, and monsters now fully animate. Menus, particularly the new battle system, look and work nicely and have buttons large enough to be used on a tablet or phone without seeming unwieldly.

The musical direction for Mine Quest 2 has a distinctly pirate based flavour, playing on rolling themes and shanties to give a sense of high adventure without ever rolling into orchestrally epic tones that would promise too much. This lighter tone allows for the humour and monster designs to fit well with the themes of exploration and each track plays for a suitable length before looping, allowing the player to enjoy them. Sound effects are clean and clear, with the action of mining nicely pitched so as not to drive a player insane as they click their way through a level. Combat also has a good sound for each action and victory yields a well recorded laugh from the dwarf that is a perfect match to the character on screen. A few more tracks added to the title however would increase playability, as recycled music does become very easy to spot over the course of longer playing sessions.

Like the original title, the game opens with a hook for the story that sets the player on his or her path and justifies the overall adventure without really contributing much over the course of the game, only appearing periodically to let you know you’ve reached certain waypoints. This actually manages to work in the games favour at times, especially in light of the title’s randomly generated content that would make it difficult to add in-dungeon actions. Still, there are some attempts to add content post-tutorial, which is appreciated. You take on the role of professional miner turned adventurer, the grandson of ‘Orli’ the same Dwarf who found himself displaced in time in the original title. Apparently having been brought up on tales of his adventures you were saddened when he disappeared one day, setting off in search of a way home. After a while a search party was dispatched to look for Orli, but none returned. That is until one magically materialises in front of you and passes you a mysterious stone before passing away. Looking for help you recruit ‘Tude’ your grandfather’s fairy companion who has aged remarkably well (only having glasses to show her advanced age whilst retaining a youthful look) but the pair of you are set upon by a monster. From here it’s up to you to search the mist-covered continent for the source of these monsters, the missing search party, and perhaps Orli himself. 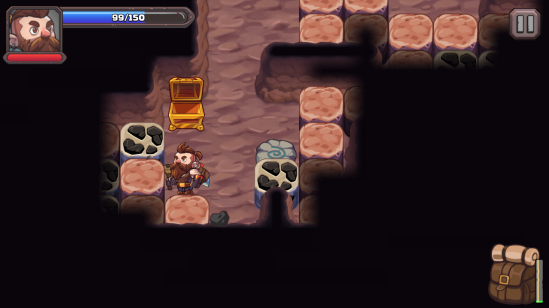 The core mining mechanic is unchanged.

Gameplay has had the biggest upgrade, whilst still relying on the central premise of entering a dungeon and searching through it for treasures, monsters and rare materials for crafting, you now have a finite amount of actions before growing weary and failing the expedition. Whilst the first game allowed for a persistent world and limited your energy with a simple refill counter, now dungeons are randomly generated based on their specifications and level. This means that there’s no immediate way to 100% the game, but it does add a huge amount of variation and replay value. Each dungeon is scaled appropriately to its difficulty and filled with different types of rock to bar your way. Tapping rocks breaks them, with different rocks taking different amounts of work to penetrate and yielding rarer materials for crafting later. Doing this takes up energy and you’ll be initially looking for the exit instead of hoping to clear every piece of dirt from the cavern. Monsters also appear to block you path and rather than tap on them in a manner similar to rocks, you instead enter a turn based battle system where your gear decides what attacks you can make. Gear comes in various types and can be levelled, as well as having elemental variants of each piece. Gathering money and items for gear levelling and crafting is paramount for progression in later dungeons and will require some grinding. Items and equipment are also scattered throughout the dungeon in rare chests or sometimes simply uncovered through exploration. Whilst the game varies content based on these randomly generated locations, it does lack in cohesive designs for them, giving each a slightly weak feel that breaks down to a simple dash for the exit. Exits require you to kill a boss before they activate, meaning you may have to explore in two separate directions if you’re unlucky. The game features a world map with multiple dungeons unlocking for each one completed, giving you a sense of progression, and each dungeon has multiple levels of depth to take into account which scale in difficulty. Daily items are given away to ease your journey (which can be doubled if you watch an advert), and the game does use an energy system for starting dungeon expeditions, meaning that you’ll be limited to how much you can play in any one sitting. Sadly there’s quite an aggressive advertisement popup in-game that wants you to watch a video after every mission or death. This can be ignored entirely in completing the game however. 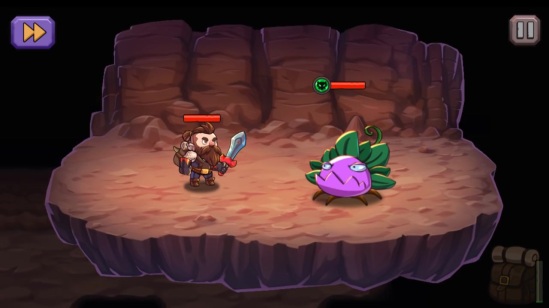 Combat is more involved than ever.

Overall, Mining Quest 2 ups the ante on just about everything found in the original game but does lose some of its sense of direction and structure in the shift to randomly generated content. There’s a lot to like about the game, especially its casual introduction to turn based combat and sense of humour, but it is at heart a Freemium title and the difficulty ramps up by the fifth dungeon considerably. Download the game free for yourself and see what you think, but we’d recommend everyone support Tapps for progressing their simple RPG in a whole new way. Perhaps Mining Quest 3 if it ever arrives will be even better.