Dead Shell is the newest game to come out of HeroCraft, the studio that brought us ‘Dark Ages’, ‘Tempest’ and ‘Alchemic Maze’. Their first attempt at a RogueLike, this game falls more sincerely into the sub-category of RogueLight, but makes up for what it loses in challenge with an insanely brilliant premise and gameplay hook.

There’s an attraction to randomly generated content for mobile games that stems from our quest to find that perfect ‘time sink’, a game that we can sink into when waiting in line or whilst on the bus. That cheeky session over lunch or whilst waiting for a meeting at work perhaps. This has seen the recent spike in popularity of the ‘Tapper’ or ‘Clicker’ of late and requires a gameplay mechanic that works one-handed without the pressures of 100% of your attention. Random content means you won’t see everything a game has to offer in the first hour of play, thus keeping your attention over the weeks to follow. RogueLights are perfect fodder for this because of their turn-based nature and procedurally generated dungeon crawls. Dead Shell embraces this idea whole-heartedly.

Graphically the game has the trappings of a 32-bit JRPG, though seen through the filter of a game like ‘Doom’ or ‘Warhammer 40k’. It embraces a wider palette of shading and colour than a title trying to lavishly recreate a retro themed game and instead uses its sprites as animated icons in a system that’s more menu-orientated than you’d first expect. Combat is a particularly stand-0ut example of this, with monsters conforming to tabs that rack up the length of the screen and allowing for some quick-tapping action without the possibility of missing the small sprites by accident. Some of these sprites are more original than others, and you do get pallette swaps as you continue. Levels build around you as you explore in an interesting manner, with the relatively simple dungeon rooms having small glowing panels and details to keep you immersed. Pixellated artwork is used for backgrounds and scene-setting, and fits into the feel of an old-school PC or Amiga game. Overall, visual presentation is excellent throughout.

Sound is also of a very high quality, effects stand out as powerful and perfectly suit the actions you take, especially when shooting one of the games many guns, which each have their own sounds. Swapping from a shotgun to a chainsaw gives a very different vibe to the sound and both feel like you’re causing serious damage with each strike. Monsters react appropriately as well, leaving the sound design as a high-note. Music is well mixed and atmospheric whilst helping to build a sense of pace and dread. Composed by Itna, it’s available for purchase as a downloadable soundtrack, linked from the games small credits list.

Environments grow around you as you explore them.

Sadly there’s no narrative on display in Dead Shell, which feels like a missed opportunity given that the game simulates progress by always moving you up along a vertical, numbered path. An introduction scrawl or cinematic would have gone a long way in terms of setting the scene and presenting a sense of world for players to explore. Alas, instead the game leaves any sense of story on the wayside in favour of simplifying the experience.

Gameplay is the hook here and is probably where hardcore RogueLike players will have the biggest issue. It’s simply not a difficult game for the first few hours of play. But the game does have an ingenious method of improving upon this and it’s by far the biggest draw that the title has to offer. Completing a level unlocks three prizes, of which you blind-draw one. If one of these prizes is a supply crate then it contains a wealth of ‘cards’ that can include new weapons, characters, monsters, money, ammo and locations. Monsters and Locations are added to a reel that spins at the start of every mission, randomly drawing a base location to explore and three monster types that inhabit it. This means that you always know what you’re in for overall before entering a mission, and that there’s always new content to unlock to make the game a richer and deeper experience. You can pay in-game currency to re-roll the dungeon if you’re looking for an easier or harder challenge (the game is pay-once, no IAP so in-game currency is the only thing you’ll be amassing) and can potentially be expanded upon hugely in future updates. Exploration of the dungeons themselves is a simple matter of clicking to engage the next monster, search the next corpse or bash open a crate, the level expanding as you do so. Ultimately you’re searching for the exit icon, but along the way you’ll want to snag as much cash and ammo as you can because in part this game is a resource management title that treats weapons in the same manner as an FPS. You have access to a weapon from the moment you draw it, but ammunition is persistent and can run out, with the exception of a handy fire axe. At this point we’ve seen 10 very different weapons and 5 variations on existing ones, with there no doubt being more to discover and some sharing ammo types. Combat sees your character (selected before the mission begins) wielding the weapon you equipped before the fight started (plus the Axe) and wailing on groups of monsters that appear as icons, damaging you on their own real-time timers and encouraging you to clear them as quickly as possible, loot the bodies and move on. Each character has their own special ability that charges as you attack and can range from freezing the enemy to restoring your own health. There’s no permanent death, which will annoy RogueLike fans but please RogueLight ones, and the game mitigates the chances of being utterly lost for resources by allowing for a dropship that you dispatch and upgrade to bring back randomly generated ammunition. 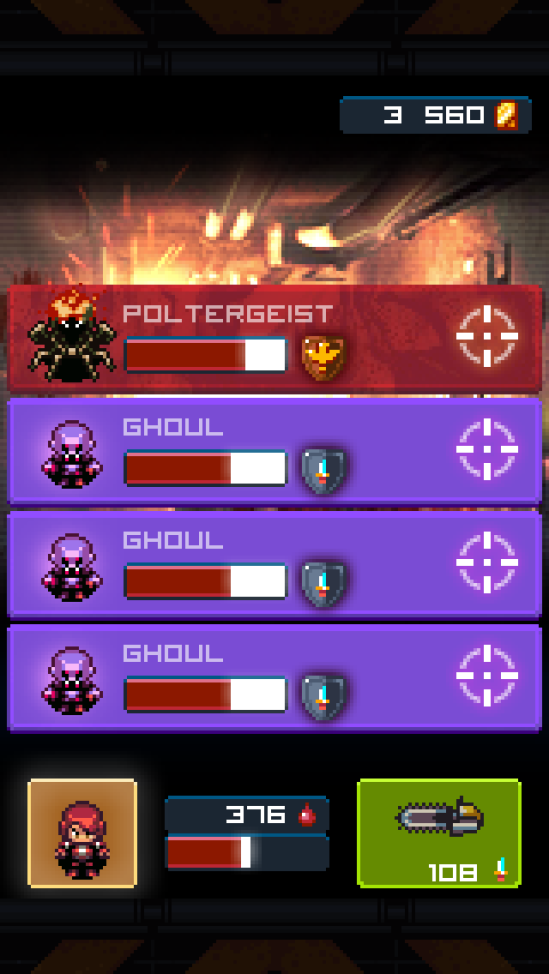 Combat is an elegant system and monsters all have special moves.

This is the best RogueLight I’ve encountered on mobile hands down. Monsters are extremely different even with palette swaps due to their diverse move sets (Ice Spiders can freeze your weapon whilst some Zombies die and respawn into new beasts) and the game has a brilliant science fiction environment to explore. Sadly it lacks in story, but on all other accounts the game manages to impress. We recommend you purchase a copy immediately!