Having already released a slew of third-party Social RPGs using their IP, ranging from the surprisingly good ‘Kingdom Hearts: Unchained X’ to the horrible cash grab that was ‘Final Fantasy: all the Bravest’, it would seem that Square Enix has finally struck on a formula that works. Despite mixed feelings on ‘Final Fantasy: Record Keepers’, it does raise the question of if the mobile market audience support so many games running simultaneously? Evidently Square thinks it can.

Brave Exvius is perhaps the closest to a traditional JRPG that we’ve seen a social game skew here at MBU. It’s a title that feels a little like it’s at war with itself, having systems in place for exploration, battles and a strong central narrative whilst also pushing individual battles, friend-based systems and character collection at the same time. For those who enjoyed ‘Final Fantasy Dimensions’ this is probably the closest to an old-school Final Fantasy title we’re going to get whilst being a new game.

Graphically the title uses 2D pixel based artwork in a style similar to that seem in ‘Final Fantasy VI’ in terms of detail, but making use of a fuller colour palette and larger, more proportioned sprites. Whilst characters and monsters from previous games appear, keeping the fan service side of the product alive and well, all of these have been redrawn in the new style and look exceedingly good with a range of animations each. Locations are lush and well designed, especially the towns which all have their own distinctive look, and high quality illustrations blend seamlessly into the delivery. High quality FMV is included in portrait format and slides in and out of play with no loading times or disturbance to the experience – impressing us immensely – especially when Espers are called into battle. The only down side is that the text box used for character dialogue has a nasty habit of cropping half the screen, where a smaller, less obtrusive dialogue box could have been incorporated that made use of character portraits. Some of the battle backgrounds are fabulous, with multiple layers of scrolling and animated elements bringing them to life with a level of effort not seen from Square in some time.

Musically this is perhaps the best Square Enix has produced in some time, remixing classic themes from the series beautifully with the ‘Crystal Theme’ a particular standout. The battle music is original and nicely scored, and new flourishes to the victory music show off what a mobile device can really do in terms of sound. Sound effects come thick and fast by the nature of the battle system, but none of them are too obtrusive and each carries the weight expected behind the strength of attack being delivered.

The world maps are particularly beautiful.

The story here is particularly strong as a starting point for an ongoing narrative. Two knights (Rain and Lasswell) are returning to the kingdom of Grandshelt when their ship flies into a strange cloud and they are beset by monsters. It is here that the pair receive a distress call from a mysterious woman framed inside a crystal who warns them that they are the only ones who can save the Earth Crystal, which is under attack from an ominous figure in black armor. Arriving too late to save the crystal, the pair narrowly avoid being killed by this monstrous man and survive only through a gift given to them by the crystal woman. The ability to summon ‘visions’ as allies into battle who take on the form of heroes from other worlds. It’s from this springing off point that a sprawling journey across the world begins that wouldn’t feel out of place on the SNES in Squaresoft’s heyday. Character banter is strong and the plot moves forward consistently through the entirety of the currently available content, making for an enjoyable play. You travel a considerably distance and take in a lot of locations in this initial installment, and if Square can upkeep the quality of storytelling and setting then this could end up being an epic tale. 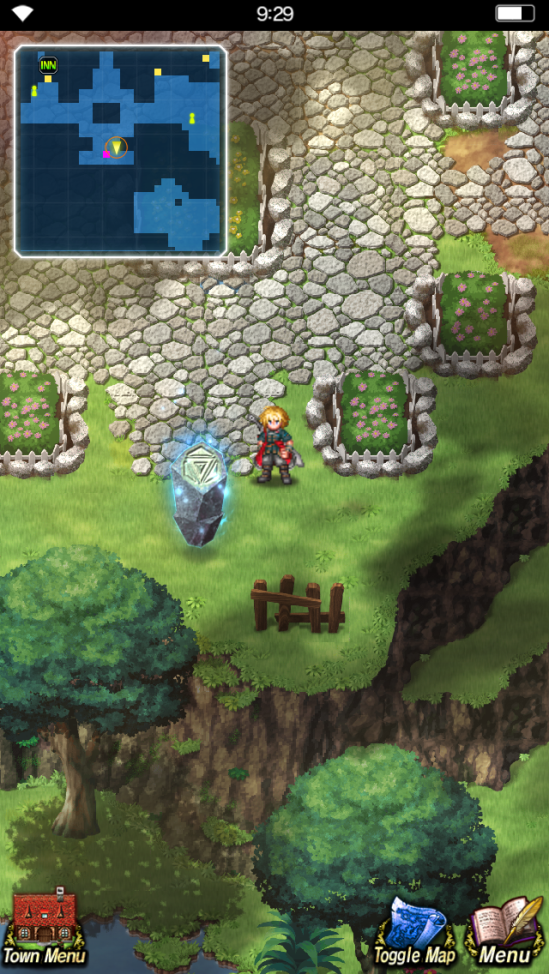 Exploration works very well, but we prefer the dpad to touch-based controls.

Gameplay is a mixture of things we’ve largely seem before, but across multiple titles. Town and dungeon exploration uses a similar portrait based layout and system to the recent mobile ports of the Dragon Quest series and you can choose to use touch-based control or a virtual dpad. Menus and sub-systems are all touch based and operate smoothly, avoiding confusion by being explained over the course of the first hour of play to avoid any possible subsystem-overload for players. Combat and character collection is very similar to that seen in ‘Brave Frontier’, with a few Final Fantasy series staples bolted on for good measure. Items, Magic, Limit Breaks and Espers are all represented here in good form and levelling a character alongside armoring them with the best equipment feels suitably powerful. Sadly characters are still pulled from a random pool and this does mean they are ranked between one and five stars, with lower starred characters only good for fusing into higher ones to add extra levels. There’s also a limit on space for characters, items and materials that can be expanded using the in-game premium currency that you also use to buy premium draws for better characters. This is relatively free-flowing in-game, and having completed all current content we never had to spend any actual money to buy some (though this is an option). Characters are pulled from all FF games past and present, including online titles and NPCs, making for an interesting party from Final Fantasy IV that contained the king of the dwarves alongside Kain and Cecil. The story progresses across several world maps with missions in locations you’ve unlocked in turn. This is where the games social and traditional RPG mechanics clash somewhat, as the areas consist of battles in order leading up to a boss, as many Social RPGs do, but upon completing the area it unlocks a traditional RPG dungeon with random encounters to explore and loot. This leaves the ranked combat feeling a little out of place if there was already a system and location map in place, why not simply explore it? Though these do give a good idea of the level of monsters and loot to be found within. Towns operate in a similar manner to dungeons and have NPCs to dish out mini-quests as well as a wealth of shops to buy items or recipes from which you can craft your own using loot. Espers bring with them a powerful attack in combat that needs time to charge, but also boost stats and add magic to a character’s moves list, feeling like a cross between ‘Final Fantasy VI’ and ‘VIII’ in terms of use and unlocking/training them is a sub-game all of its own. Capping it all off is a Colosseum for tournaments and grinding purposes, as well as an area based on the ‘Farplane’ that has special limited-access missions and Moogles. A friend’s character always accompanies your party into battle, and making allies is pushed to the fore by the games own daily missions, which dish out rewards. An energy system is in place here to limit sessions and attempt to slow players from clearing everything in an update in one sitting, which seems reasonable for episodic content.

Fran and Terra join the party after a first round of random draws.

Overall this is a significantly better title than ‘Record Keepers’ and has the added bonus of not spoiling the plot twists in classic titles for those who haven’t read them whilst also providing both an original plot and its own form of fan service. It does rely on the crutch of established Social RPG features where a more streamlined and original game lies buried, but unlocking that experience and looting dungeons in this new world is a task worth undertaking. The real shame here is that it’s a Social RPG at all, had ‘Dimensions’ sold better this may have been a stand-alone mobile title of the highest order, but we make do with what we’re given, and Brave Exvius certainly shows a lot of polish.