If you fused the basic battle system found in the original ‘Shining Force’ with the card-based play style of ‘Hearthstone’ you’d have a decent idea of what Duelyst is. It’s an interesting take on the online PvP and tournament genre, but does it stand up to the usual depth that a Tactics RPG contains?

The product of Counterplay Games, Duelyst is a love letter to a lot of different sources. There are clearly defined elements of Hearthstone here, but also early Tactics RPGS, pixel art based on the 16bit era and visuals clearly inspired by the extreme end in over the top Anime and Manga. There’s a heavy lean on building a competitive and loving community for this title that’s supported by social media links and discussions on Reddit and Discord as well as a complete Wiki made available at launch, which should make for an interesting period of players finding they groove and friendly competition that will be the heart and soul of the game.

Graphicalls the game mixes HD anime inspired hand-drawn visuals for characters (largely the generals you command and their opponents) with slick menu presentation that uses high quality painted art and a faux-retro 16-bit graphical style for characters on the field. It’d an odd combination that works, but makes you wonder if they are appealing to too many niches with this product. Clearly they are using pixel art to look cool for retro players rather than creating HD character sprites with a high level of polish (which ‘Battleborn Tap’ managed effortlessly despite being a humble Tapper). It does gel after a short while with the game, but the overall lack of cohesive art style harms Duelyst in its long run and some sprites fall into pixel messes trying to convey richly detailed characters in a small space with limited assets. The menu system is clear however and details are always easy to read and assess.

Musically this title manages to pull some truly epic feeling punches by using an orchestral soundtrack that really pops from the second the game is booted up. Battles feel fast and furious all the more because of this and the whole atmosphere of the game is lifted. Sound effects vary but are on the whole a strong selection and they leave no doubt that blows have connected as visceral blood splatter, sword swings and blunt impacts resound from the speakers of your desktop. There are a few too few effects to cover the large range of units and generals to collect however, making for a good deal of sharing between the small pools of sounds on offer. Voice acting, when presented, is of a good quality throughout.

The narrative for Duelyst is unlocked through play as a series of optional but informative books that can be read or listened to as an actor/actress emotes their way through their entry into the worlds history. The plot largely revolves around the presence of a mysterious monolith that chosen Duelysts are sent to conquer, with the world around spiralling into decay. Nations have agreed to forego wars in preference for placing rules and backing their generals in the contest to conquer this tower, and put their full weight behind every action you take in their name. It’s really just a setup for 2-party battles to take place indefinitely, but the background has clearly had a great deal of thought put into it and unlocking narrative content always feels like a treat. 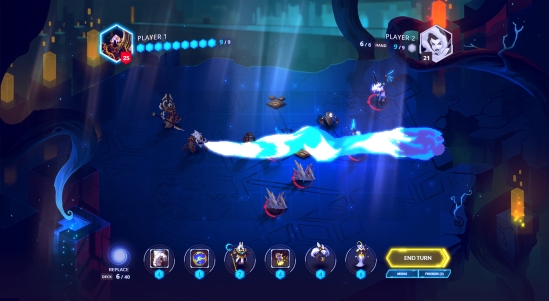 There’s a wide range of initial units to unlock.

Gameplay, or more specifically combat, is the meat of this title. Each side takes turns to move their general on a small 9×5 grid, attack, play any spell or equipment cards and summon monsters using a pool of energy that increases by one point every round. A hand of five cards is drawn at the start of the game signifying your initial options, of which 3 can be discarded and redrawn, obviously with a preference for lower cost cards at the games outset. These represent your options and a new card is drawn at the end of every turn to give you time to think about what you want to do next. Monsters and Generals have a clear health and attack value, and the objective is to kill your opponents general by any means necessary. Three points exist at the centre of each map that when conquered add 1 temporary point of energy to your pool for the turn, and these are usually the source of an initial scramble and armouring stage before the two sides really get down to fighting. Everything works using the mouse, mostly via drag and drop mechanics that emulate the use of a finger on a touch screen, and generals each possess once special skill that has its own cooldown timer. So far, so very Hearthstone, however the added dimension of movement and extra tactical considerations it brings do subtly affect the gameplay. Do you keep your general moving or hide him in the corner? He/she is usually also a powerful attacker, should you be bludgeoning the opposing side instead? Where can I summon this creature to do the most damage or cause the biggest distraction? Battles are generally about 5 minutes long against the AI for practice mode, but can run to 10 if you’re facing a thoughtful Human opponent online. Prizes and levels are awarded after combat and collecting currency allows you to slowly purchase new blind booster packs of cards that rank from common to ultra rare. Building your deck is easy, but at the present time few options are available to feel like you’re really doing more than selecting skins for stats, though some monsters possess interesting sub-skills. Ranged attackers currently feel at the biggest disadvantage given the small scale of the grid, making their massive usefulness in traditional Tactical RPGs feel blunted in a scenario where a character at the center of the board can get to any space in one turn. The game features a variety of modes that you unlock through play, adding options to menus and content to the game that begins to pique the interest of the player after only a short time. Ranked matches, etc are always present and the title feels like it aims to be a competitive competition-level sport at some point soon. Annoyingly, you swap sides on the battlefield occasionally, which can cause mild irritation and disorientation at first, but this has obviously been included in an attempt to mix up the usual right to left swing of AI driven games.

When inactive your UI turns grey.

Overall, if you enjoy Hearthstone you will likely quickly take to Duelyst and its take on the Tactical RPG genre, however if you’re not a fan of dumbing down the complexity that these games have traditionally enjoyed then this game will not be for you. Duelyst has released onto desktops, but has been developed in such a manner of control that I imagine it will be hitting tablets or mobile (touch screen devices) in the near future, with perhaps that being the best fit. It is however entirely free to download and play right now, and I recommend you at least try it before making any rash decisions.