The curse of mobile gaming is that some titles don’t make it over the long-term, they’ll appear and generate a loyal user base before disappearing and becoming unsupported when sales slow or reviews are less than impressive. Dragon Seekers has been around a little while, but not that long in terms of the iStore, but will be cancelling its services this month.

There are some problems with Dragon Seekers from a gameplay perspective, but it’s possibly its lack of community coupled with the developer’s lack of content to hold on to the community it maintains that harmed this title overall. Playing feels like towns should be full of player characters and honestly many are empty or contain less than ten other players, usually as new to the game as you are, making everything lack identity. For Social RPGs the community is first and foremost the games priority and in this aspect Dragon Seekers failed to live up to its promise.

Graphically, Dragon Seekers has a visually pleasing style that mixes hand-drawn 2D art assets and layers them onto a semi 3D environment to present a whole world that feels like a classical map painting. Characters demonstrate pencil lines and have a cartoon-like quality similar to European comic book artwork (the French series of ‘Asterix’ books for example) and the game does an excellent job of allowing overlap between elements that are technically above and below the playing area whilst also maintaining the 2D illusion. Players create avatars based on their personal choice of visual elements, class and body type (decided on sliders for height and weight) and equipped items display on them to add further flourish. The avatars of other players inhabit the towns and follow along visibly behind the player when in a party, lending things a social feel and monsters are inventive if largely unanimated. It’s a clever look that lends itself well to a light social RPG.

Musically the game has a bombastic, orchestral feel that screams high-adventure and gives the game an animated movie style vibe. It’s really a very strong score and speaks volumes for the games quality, especially on the title screen. Sound effects are slightly less interesting but manage to convey what’s happening on screen in a reliable way that’s a little sharp but never out of place. Battles are actually extremely dull, lacking in options until you level characters.

In terms of narrative this game feels a little lost. There’s very much the impression that the onus is on the player to to go out and make his or her own adventures in the sandbox that has been created for you but that game has a strictly guided sense of progression that makes it feel like it should have a story to follow in the traditional sense. You’re essentially an adventurer who has come to port fresh off of a boat from locations unknown to seek challenges and test yourself. The games Timeline feature charts all of your actions and deeds (and can be linked to facebook) in an attempt to build a narrative but this leads to a lot of ‘went there’ and ‘killed that’ short posts that feels like reading a bullet point summary of your sessions rather than notes on an exotic adventure. The games NPC guide, a small cat with a lot of personality, is well written and works brilliantly and more of this level of writing from NPCs (or more NPCs in general to help world building) would have made the game far easier to invest in. 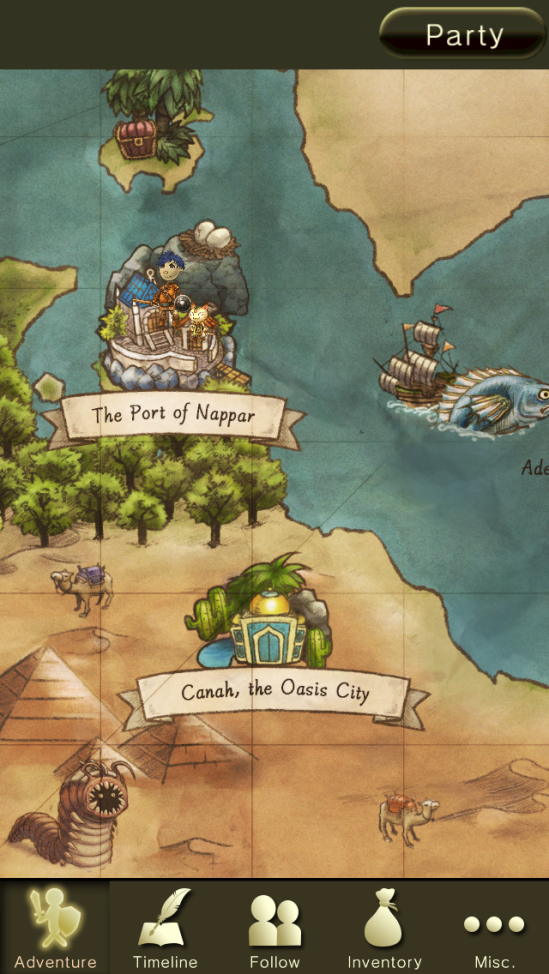 The world is large but also quite empty.

Gameplay is something of a mixed bag with this title, with free-roaming exploration of the games hub cities that works decidedly well given that you’re in control of a custom-made avatar and uses simple finger presses to guide your avatar flawlessly around the environment. These town hubs allow you to build a party of four quickly and efficiently by tapping any visible player’s avatar and tagging them in, essentially bringing their avatar into your group and controlling them in a single player experience. Towns also contain shops of various kinds and act as giant interactive menus that you can explore. Aside from looking great they don’t amount to a great deal past this, and changing location as you progress leads to simply a new coat of paint over each menu area. Most towns link to a number of dungeons that you’ll need to clear, with dungeons taking the form of a series of battles that must be cleared to progress to the next ‘floor’. Sadly there is no exploration here, wasting the otherwise excellent movement control and combat consists of each character having a single move (at lower levels, though this opens up later) and individual cool-down times, making it a case of triggering each in turn every battle in an endless loop. Levelling characters and gathering resources that can be channelled into building items and equipment comes exclusively from grinding dungeons. This does not mean replaying them, with the game instead sending the whole party on a timed sabbatical into the dungeon whilst you wonder around and shop as the games kitten mascot. This robs you of further gameplay and when coupled with real-time waiting for items and dungeons to be finished can amount to the whole game being a case of hanging around doing next to nothing at all. The game is (was) sold on the concept of linking it to Facebook and letting it post your adventure in a timeline to your wall, but this sadly amounts to nothing but a series of ‘Bill went to seashore caves and killed 10 monsters’ posts appearing in your account. It’s an honest shame because the games travel and exploration mechanics feel extremely polished and its social aspects worked very elegantly – all functioning on single tap mechanics, so to spend so much time inactive and to avoid real dungeons feels like a massive case of wasted potential. Exploring as a mascot while the game plays itself.

Overall one of the game’s biggest failings is that loading times are decidedly longer than you’d expect an older mobile title to have. Occasionally the game also fails to load, which is similarly unforgivable. Obviously, the games servers are set to shut down in April 2016 and support will disappear immediately if it isn’t being wound-down already at the time of writing (late March), so there’s little to no point in going looking for this game now. It may be worth keeping an eye out for future games from Good Feel.