Warbook has the tentative honor of being the first ‘RPG’ to appear on Facebook. Though extremely simplistic by today’s standards, this title deserves respect for showing the world that a social network could handle persistent worlds and juggle multiple stats and counters. 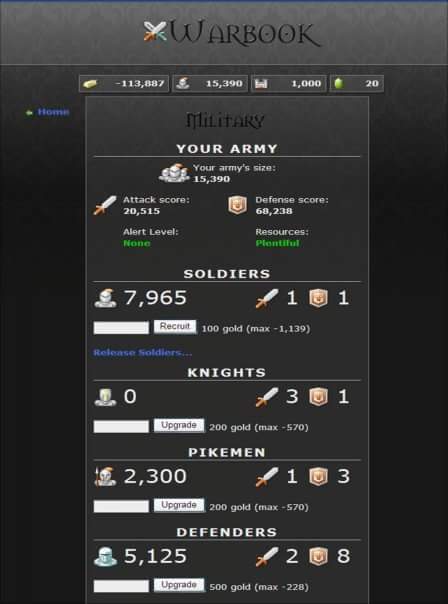 Visually the game was extremely simple, using icons and text.

When Facebook launched it wasn’t considered a gaming platform. Quizes created by users were the closest thing that the medium managed for the first year or so before very basic puzzle games started appearing. Warbook was greeted as a breath of fresh air, promising a more meaty experience that took its users seriously and managed to pull over a billion players on its first day alone. Though the game (and it’s sequel ‘Warbook 2: Rise of the Infernals’) has long since vanished along with its publisher, for a short time this was the ‘next big thing’ and introduced many social gamers to the concept of MMORPGs and MUDs who would otherwise never have encountered them.

Graphically the game is a throwback to early text-titles, using the background of the page it played on to set a tone (and throw a title to the top of the page at all times) and relying on small icons to impart information on unit type, strength and defense, etc. Text is the main method of relaying data here, and that is primarily done through the use of numbers. Descriptive text is rare, and presented in a dry tone that imparts information but does little to set up a sense of world. The game does however have a legibility that can be read at a glance, with information you need to know thrust to the center of the experience at all times.

Warbook featured no sound or music in-game, being an early Facebook title the developers likely thought that many players would be hopping on/off of the game while at work (mobile phones were yet to embrace internet access in a big way) and for the most part they were right in this decision. Most sessions of this title are played in s few seconds, in which time music would have just loaded in time to be closed again. The lack of sound or score does make this quite a flavourless experience, but working in the confines of the time it is a decision that makes sense.

In terms of narrative, Warbook has a very simple direction. You are a newly crowned king in charge of a struggling kingdom. All around you rivals seek to invade your borders, pillage your supplies and burn everything to ash. The best way to survive? Build your defences, invade neighboring countries to snatch land on which to build barracks and raise a standing army. Forming alliances and turning what was a small kingdom into an empire. In terms of story the initial brief is as far as the game goes in setting the scene, though it does an excellent job of setting the stakes and the title’s MO almost immediately. Due to the persistent nature of the world those other kingdoms are very real and possessed by other players, meaning that your kingdom really is a target and putting the onus on you to get to work straight away.

Your kingdom in all its glory.

Gameplay is a fusion of Strategy gaming in the mould of titles such as ‘Lords of Midnight’ and RPG elements in an early text-adventure style. Ultimately the game skews more directly into its strategy elements but the player character chooses a class at the games outset and levels alongside his kingdom, bringing a few stat bonuses to his lands that add depth to the experience. The game starts you out with a set amount of free land upon which you can build and a small army. On that free land you can build a variety of buildings such as forts and mines, which provide you with hourly deposits of gold. Your army defends the land and can be used to attack, with multiple unit types available with different stats and specialisms. Raiding other kingdoms grabs land and gold but comes at the risk of being slaughtered, whilst standing still means you don’t grow and remain easy pickings for stronger players who could attack you. Your army also requires an upkeep cost, which is withdrawn hourly and requires the player to manage their in-comings and outgoings carefully whilst having enough gold left over to build and train new troops with. Base level troops can be trained up into more powerful units with gold as well, increasing their potency, and when not online the persistent world continues to tick along, delivering and taking gold and defending the place without you. In this manner it is a little like Sega’s ‘Pocket Kingdom’ for the N-Gage. You’re always told your kingdom size, and the bigger the kingdom the more of a target you become, making alliances with other kingdoms a necessary evil if you want to appear less of a target. The game did fall into a little of a bullying ground when it was running for new players who weren’t a part of an alliance, quickly discovering that picking on a likely target saw them being attacked in quick succession by up to a hundred other players who had a close alliance. Naming openly the player who attacked you is a feature incorporated into the game, allowing allies to do so, and whilst you can only attack a rival kingdom once a day the results of a mass attack on that level can be devastating. Luckily players beaten more than a few times were placed into a defensive stance that took them out of the active pool of kingdoms for players to raid, moderating this somewhat, and the game found a quick balance with guilds (alliances) bringing new players under their protective wings. Huge gold incentives for bringing new players into the fold were later added, as was gifting army units between friends to help each other out in a pinch. 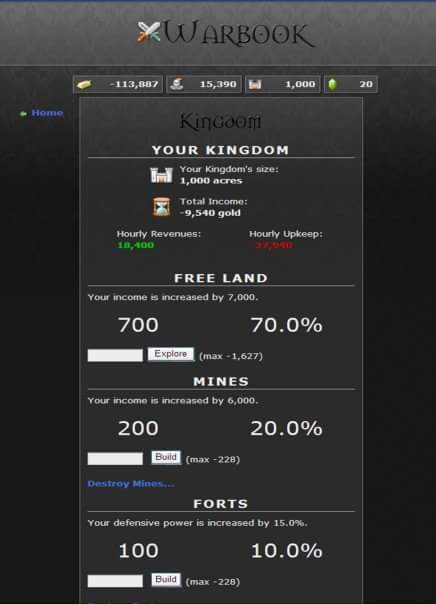 Building and expanding are crucial to survival.

Overall there’s really not a great deal more to Warbook than the above. It and the company who made it were extremely popular for a few months and then vanished without a trace. Today finding any information on the game online is difficult, if not impossible, and we weren’t even able to ascertain the developers name when writing this review. As an example of the time it was an ambitious project, free of in-app purchases and made with considerable care and frequent updates while it was active. Today the same game would be riddled with pay-to-win options or premium unit bundles. Sadly the experience was also a little dull over long periods and the fade wore off, with Facebook development taking off in a big way and leading to games such as ‘Deep Realms’ which were considerably more ambitious.

NOTE: Subsequent to writing this release information was discovered that ‘SGN’ was the title of the now defunct developer of Warbook.