The last major instalment into the series canon, the title was followed by ‘Arc the Lad: End of Darkness’ which broke from the tactical roots of the series in favour of being an Action RPG and focused on bringing a mixture of old characters from previous games together. Twilight of the Spirits sets itself significantly later in the series timeline that previous instalments and serves as a form of epilogue to the ‘Arc’ saga, briefly featuring a cameo from the spirit of Arc himself but ultimately closing the book on that narrative.

Graphically the game is genuinely pretty, with excellent visual design and character models that show a lot of detail. The 3D models and textures look a little simplistic from the standpoint of those encountering the game today, but comparatively at the time only ‘Final Fantasy X’ was seriously beating it in looks and there are plenty of visual nods to past games hidden for players to find. The world itself is brilliantly realised, with cities overgrown by nature, broken technology scattered around and small towns given an amazing amount of character. Things do verge on the unimaginative in terms of colour scheme, with a lot of earthy tones in place to try to ground the experience, making some of the more interesting characters appear dull next to the more imaginatively drawn ones.

Musically the game features a souring theme that is used throughout at key moments in the narrative to great effect, but falls down somewhat on more repetitive battle themes and uninteresting background music for towns. Story sequences are scored well however and it helps to add to the games cinematic nature. Sound effects are vivid and functional, though again some can be dull and boring due to an insistence on remaining true to real life rather than embracing a heightened sense of reality.

Even by today’s standards, the character models are impressive.

The games narrative is its strongest asset. The world is split between two cultures, both of whom rely on Spirit Stones for their way of life. The Humans use these to power their technology, which has become greatly simplified for the most part when compared to that seen in previous titles, though closer to the capital the level of technology increases. Monster-like Deimos have innate magical powers that they use in day to day life and these are cast using Spirit Stones, meaning that they feel like they have an innate bond to them. Recently the Human army has begun to expand across the world, claiming many abandoned regions and grabbing as many of the dwindling stock of stones as they can find. The Deimos, warlike and quite monstrous by nature are spoiling for a fight over this and it looks like a major war is on the horizon. Luckily the spirits are determined to prevent this and to achieve their goal they approach two heroes who may be able to unite the two races. Brothers, though neither is aware of the other’s existence. Kharg and Darc. The game plays out a chapter at a time, switching between them and their respective parties and pits the pair’s goals at odds for much of the story’s duration, though soon a greater returning evil makes itself known. It’s very well written material and the story is certainly the games key focus, keeping the player invested when some of the gameplay has become dry.

Like its predecessors, Twilight of the Spirits is a Tactical RPG, though in this case some changes are made to shake up the formula. Gameplay is taken off of a grid and instead characters have spheres of movement that limit their range and allow players to position them where they want, with attacks having their own areas of effect as well. Turn based by nature; characters take turns to move and attack before passing on to the next character or enemy in line. Special attacks are used by casting from a pool of Spirit Stones that characters carry with them and whilst these are sometimes dropped in battle they have to be purchased in towns rather than replenished with rest. Magic is also present and can be cast by Deimos characters. The game places a big emphasis on weapon customisation, adding status effects to blades or items to increase their range of effect to target more enemies in a single action, etc. It’s a solid system but you’ll find that some items feel worthless in the face of better equivalents and late in the game you’ll already have them set up to play to your character’s individual strengths. No two characters play the same way regardless of class, and this individuality (a staple of the series since its first instalment) is admirable as it forces you to get to know a character and his/her quirks. There is a returning character from ‘Arc the Lad 2’ who can be recruited optionally but is easy to miss, and the game regularly has the plot decide who you field rather than letting you choose until close to the games finale. Battles often have multiple elements to take into account and objectives can range drastically between battles. 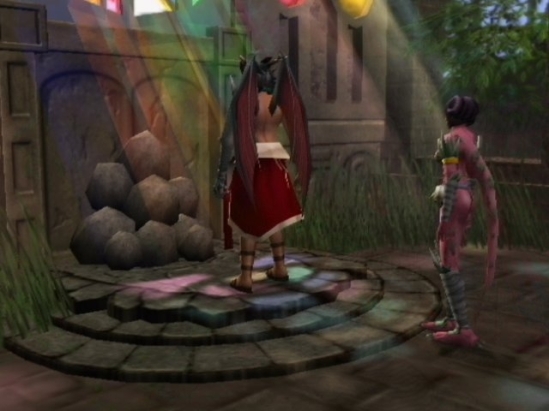 Overall, Twilight of the Spirits is a great game that changes up elements of the tactical system but does in some ways feel like a very light take on the genre. It’s closer to a traditional JRPG with a quirky battle system than it is a Tactical RPG. There’s also the problem of having to close out a series that many believed peaked with the exceptional ‘Arc the Lad II’, which is difficult in itself. It is however a good story, well told and a fitting climax for a series that’s run its canon for a considerable period. Seeing this as the series logical conclusion and ‘End of Darkness’ as a bit of fan-service to celebrate its run elevates both to a higher level. Though it’s not available in the European version of PSN, it is available in America in digital format and it can be hunted down in its original PlayStation 2 format with a little searching.