Whilst the original ‘Pocket Summoner’ was forced to make do with the mobile conventions of the time, its sequel finds itself launched into a very different modern market. Mobile gaming has evolved and changed dramatically over the last five years and Pocket Summoner Origins is a game that is fully aware of this fact.

The game wears its inspiration on its sleeve.

Effectively a total remake of the original game, wrapped in the trappings of a prequel, Pocket Summoner Origins revamps almost every system that was found in its predecessor whilst embracing many factors of mobile gaming that are popular today. Whilst this means that an internet connection is necessary to play at all times (a factor that also plagued the original) it also means that the game comes across as a hybrid between traditional JRPG and MMORPG at times, with a bigger focus on forming an online community past occasionally battling another player.

Graphically the game has foregone 2D illustrations in favour of sprite-based artwork and backgrounds. This is an interesting choice, because the original’s art assets (when used) were quite strong and helped it to stand out. It also has the immediate effect of making the game feel a lot closer to its obvious inspiration, Pokémon, in both style and presentation. This is evidently a deliberate choice on the part of Riida.com and in all fairness it seems to be paying off for them, allowing the company to re-use all of the original monster designs in a sprite-variant of the original artwork where lesser companies would have just re-drafted the older images into their new game. Some considerable effort has gone into this fact, as the games sprite work is excellent. Gone too are the pages of menus, with a new, sleeker system in place that favours player interaction with the world over mindless tapping of the screen to watch gauges fill.

The sound used in the game is targeted directly at the retro sweet-spot of SNES themed classics. Some areas are reminiscent of ‘Secret of Mana’ whilst battles have an intense ‘Mega Man X’ sound to them. Although the heights of those scores aren’t matched in the compositions on display, the music does run for an agreeable period of time before looping and do so seamlessly. Sound effects are also present in greater abundance than the original (that made three samples work hard!) and again these have a distinctly 90s gaming aspect to them. The games sound actually works in its favour as a way in which this title distances itself from its inspiration, with the late 80s to early 90s era console theme providing more character than attempting to emulate the sound from a Game Boy.

The narrative of this title is largely similar to the original Pocket Monsters, with the player cast as a self-named protagonist who is tucked under the wing of the series’ main character. There are additional features this time however, such as the chance to design an on-screen avatar for yourself and see a variety of story sequences where this avatar features prominently, starting with a glimpse into your childhood as an untrained and misunderstood Summoner, and dealing with your encounters with the series hero. In this version he’s a little more of a care-free type who’s not always on the right side of local opinion and is largely seen as a trouble maker. Seeing the potential to be a great Summoner in you he helps you grab your first Guard and encourages you to help him with his dream of founding a town where Summoners are more readily accepted. NPC characters, towns and various areas to explore all help to add to the games immersion and whilst it’s never a gripping narrative the game gives you plenty of reasons to keep playing. 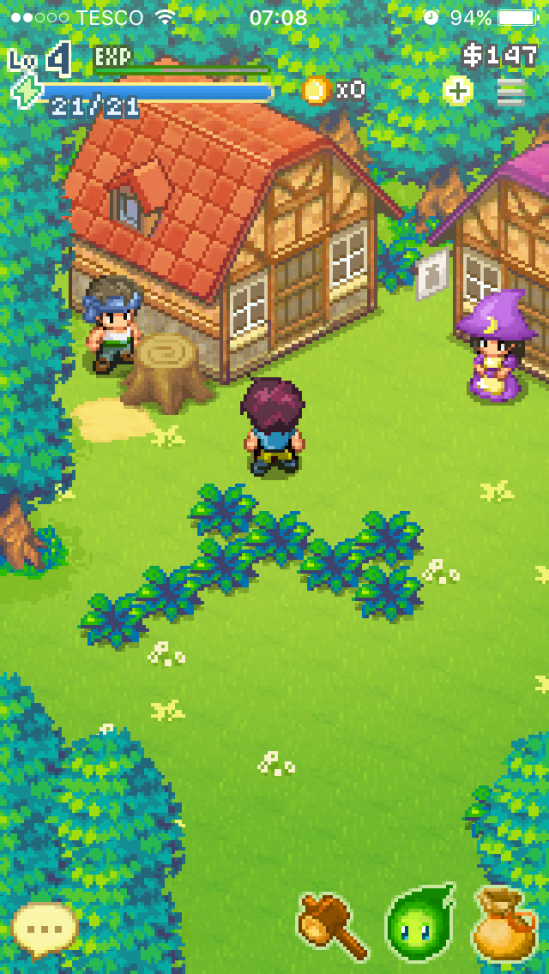 Town building is a key element of game play.

Gameplay has seen the biggest shake-up from the original, with the player avatar now moved around towns and able to explore areas using a simple directional press of a finger, stopping when said finger is lifted. Tapping a character in the vicinity, handily marked with a speech bubble and additional store icons when close enough to do so, triggers interaction and dungeon levels are full of items to collect in the same manner. You switch locations via an in-game menu that pops up when leaving an area or a dungeon is complete, and this uses a simple stage-progression system to track your progress. It’s significantly more tactile than the menu-driven original and allows for the game to feel like more of a cohesive world. Dungeons also contain a set number of encounters, or in the case of a boss area, unlimited encounters and a single boss to fight. Completing the parameters of each quest clears the area and unlocks the next, giving you a handy boost in experience for your avatar, mana for your monsters and in-game currency. There is a freemium aspect to the game in that real-money can be used to purchase in-game assets, but it’s never forced on the player and remains tucked out of sight unless you make a point of looking for it. Battles are no longer automated but do run on a simple system where two monsters face off on their own individual ATB timers. When your gauge is full you can select a skill for your Guard to use and then must wait for the timer to refill, with the first monster to hit zero health being the loser. It’s a little dull at first and monsters scale in level meaning you’ll see a great deal of the same monsters in the same area at different levels, but after some training the system opens up a little. Monsters can be caught and turned into Guards based on a chance system that links to how you’ve trained your previous Guards and your avatar level, or they can be turned into crystals of different colours that can be collected and fused into new skills for your Guards to learn. Guards themselves can learn a total of four skills each and are levelled by spending points from a communal mana pool, meaning you can’t always have everyone at that same level but that new low-level monsters can quickly be brought up to speed. Enchanting monsters is also possible and adds a number of effects to them individually. The game’s biggest new strength is its town building, which cribs from the likes of ‘Dark Cloud’ to present you with the ability to forge your own community, buy in shops and plant a farm among other things. This growth makes the game genuinely feel like it is going somewhere and the MMORPG aspects include seeing how friends towns are faring compared to your own. In hub towns you can also engage in chats with other players as well as duels, keeping the games community feeling lively in what is for the most part a single player JRPG. 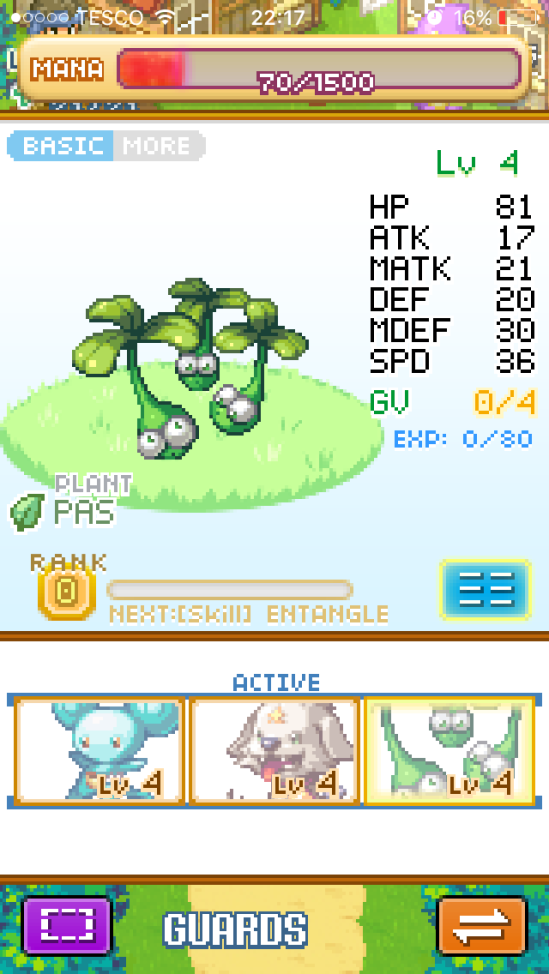 Monsters all level from a communal pool of experience.

Overall, Pocket Summoner Origins is a marked improvement over the original and an intriguing game that with continued support and events could grow into quite a solid online game. Its single player campaign is fun without being over-complicated and whilst it emulates the creature-capturing aspects of the Pokémon franchise it’s working hard to build its own identity. I recommend that you download it yourself from the iStore and see what you think, it is after all free to do so.