There’s a simple warning to be found in Zodiac that we should all take to heart. Even if a game is being developed by famous or even beloved names in the RPG genre and boasts some amazing artwork it can still be a horrific mess.

Zodiac started development as a freemium title that made a late shift to a premium price tag. For many this was viewed as a good thing, with gamers craving a more nourishing experience to sit alongside the epic storyline and luscious graphics the game was teasing. However on launch it quickly became apparent that Zodiac was unfinished, not just in the abrupt conclusion that promised that the story would be continued soon, but in the layout of the game itself. Elements of a freemium title littered the landscape of a game that many had paid above the average price for and an announcement by the games developers that the current short campaign would be expanded upon in additional paid in-app DLC instalments soured the experience considerably. These aren’t Zodiac’s only problems however, as we will discover.

Graphically the game is beautiful, character designs and art style are truly this games key selling point and the presentation is near-flawless. Using multiple layers of hand-drawn 2D illustrations that animate seamlessly the title feels like a handheld cousin to ‘Child of Light’ and captivates with vibrant locations. When exploring the game starts to come into its own and discovering small visual treats is a highlight of the experience. Character designs are well crafted and monsters feel vibrant and original compared to the somewhat stale ‘slime’ or ‘bat’ we tend to see in the mobile market. Unfortunately there is a little inconsistency in the visual of a monster compared to its power in battle, with smaller and weaker looking foes sometimes taking considerably more effort to kill that the juggernaut standing next to them. A visual tell or more thought on this matter would have gone a long way, as at the moment the only way to check on enemy strength is to peek at their stats by tapping their portrait on the turn order. Animated cutscenes are used frequently, and although they lack voice acting they are extremely well done. At least at first, as the game abruptly shifts animators after the first few and trades a western animated style for something resembling a motion comic, with characters snapping between static poses and far lower production values. Neither animated style matches the in-game art in any way, but the high quality early scenes at least meet the expectations of the player and capture the games energy in those early segments. Menus are nicely crafted and look great, although it was a disappointment for so much of the game to be menu-driven outside of dungeons, which no exploration of towns to speak of. 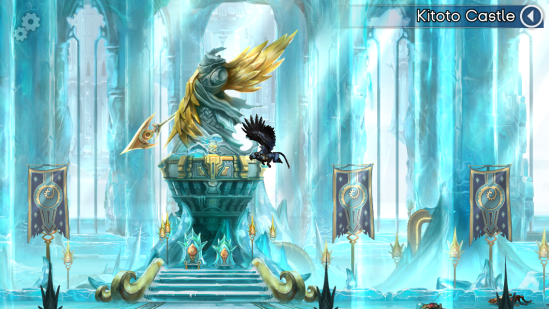 The game looks beautiful in every shot.

Sound on this title is similarly very nicely composed and it brings an elegance and beauty to the game that can sometimes otherwise be lacking, tying together the clashing animation and game styles. Battles feel emotionally driven and the games opening cutscene drives home a sense of wonder and excitement to match the animated characters on screen. Hitoshi Sakimoto, who worked on ‘Orge Battle: The March of the Black Queen’ and ‘Final Fantasy Tactics’ has done an excellent job where the soundtrack is concerned. Sound effects vary in quality but sound crisp and usually fit the tone of an environment, with nothing coming off as comical in the games more serious setting.

The plot of Zodiac is involving, though it does lose steam after the opening hour or so of gameplay. Set within the fantasy world of Orcanon, you play as a guardsman of your own naming (‘Cael’ by default) who serves in the mounted division of the Borderland Patrol, riding a winged sabre-toothed tiger. After a traditional introduction to combat with your older sister Ulan, who has risen through the ranks to hold the title of Head of Security for a newly appointed Governor, you go on patrol to ensure that the route into Orcanon’s central city is clear for those coming to pay their respects. These delegates being largely made up of officials from the world’s bickering tribes. Fawlkon people are part bird, Geckal are part lizard, Orsa are part lion and Phyltrians are an aquatic form of life. The human-like Hyum are of course your character’s race. A chance encounter with an ancient relic unlocks powers inside you, but as touching one is forbidden you are jailed awaiting sentencing for your actions. When a riot occurs in the prison however the scared guards release you and your mount to help quell the rampaging inmates and a greater journey begins. It’s well plotted stuff and although dungeons can often drag for a little too long, there is a wealth of world building and information to be learned by chatting to the NPCs that are thrown your way. Though later quests slow the pacing, several key events keep the game interesting through its short duration. The main problem is the jarring and sudden halt to proceedings that comes too soon to feel like you’ve gotten any answers or your money’s worth from the title. There’s a vast world to explore here but much of it, whilst presented as if you can travel to it, is locked away for later installments, leaving a thread-bare experience.

Combat is a surprisingly good system

Gameplay suffers from the same problems, the game quickly shows you 14 potential job slots that your character can delve into and unlock skills on long, branching trees, but only 3 of them are actually available. The world map is similar, with all of the games various races homelands represented as destinations without many being accessible. It’s a game that throws out a lot of world building and complex systems and then promises you you’ll have access to them, whereas by the games end you’ll have only just started to make headway. The dungeons are the games primary focus, and these are for the most part well managed with movement in four directions managed on the back of your flying mount, although the movement speed is slow and touch-controls feel a little inadequate to perform tight rotation of the beast. These areas show off the games combat and puzzle solving as well as throwing tons of optional NPC dialogue into the mix if you stop to speak to them. Characters who have something important to say are clearly marked with a question mark or exclamation point, and sub-quests are usually easy to pick up in addition to multi-tier mainline quests that evolve as you explore. That each location can be taken on in easy, medium and hard difficulties feels like a hang-over from when the game was going to be free to play, and seems to serve no clear purpose other than keeping gamers grinding while they wait for an expansion to be released. Combat is initiated when collision with a glowing orb occurs and is strictly turn-based. Each character has a build all of their own that takes a little getting used to and serves to help you learn a pattern for their attacks, with special moves having cool downs in place of an MP system. There’s an emphasis here on stacking status effects to boost your party or lower the enemy’s effectiveness that some will find tedious when even the weaker enemies require considerable inflictions before becoming vulnerable. The lead character can shift between jobs to alter this up a little and any character can summon his mount for the turn to deal significant damage once its timer is ready. It’s a solid system only let down by frequent bugs that hide damage totals, fail to display the correct amount on health bars and on one occasion generated an immortal enemy that I couldn’t wound. Smaller bugs plague the menus, with graphics occasionally not loading, such as faces on experience screens post-fight. Whilst your main character has a skill tree to unlock, other characters do not, meaning that levelling and buying them good equipment is vital to keeping them relevant in a fight, although at times these characters feel far better powered than you do yourself. There’s item crafting (also a leftover from freemium days as it serves no purpose past using up useless junk dropped in fights) and a shop, that stocks everything you’ll ever need. A glitch in the inventory screen mid-battle appears frequently that prevents scrolling down then line of items, forcing me to carry only those I needed and that would appear on the screen, but the experience of others may vary. The rest of the game is made up of menu-skipping to travel to different locations and story sequences, with no exploration off of your mount (even on tight indoor segments) and no exploring of towns to be had.

This is a game in serious need of a patch. Bugs, such as one that saw me solve the same resetting puzzle three times in a dungeon before I was allowed to progress or immortal enemy generation are forgivable in a freemium title but not in one that requires a significant financial investment. At launch this game was $8.99 or £6 here in the UK, that’s above the average. What is presented is well intentioned and interesting, but it’s not a complete or in some cases playable game and the app store description has been recently changed to insinuate that this is the first in a series of releases when it launched with much hype as a stand-alone game. Kobojo needs to fix the existing game, then look long and hard at how much they intend to charge for these expansions because whilst gamers will happily drop full price for a Square Enix classic such as ‘Final Fantasy VI’, they know they’re getting a complete self-contained experience with those games. With Zodiac you’re paying for what amounts to a demo. It’s the equivalent to the free opening chapter of ‘Final Fantasy Dimensions’, without the strength of character to lay its model or overall cost out for us in advance.

At this time the game is still seeking funding for Android, PSN and Steam releases. I would hazard a guess and say that the latter will only occur when this title is completed, as backlash on the iOS version has been quite visceral since launch. Don’t purchase this as full price, with for a significant reduction and perhaps one or two of the expansions to have seen release before testing the waters.

NOTE: Since the writing of this review, Kobojo has announced that the games price will be slashed dramatically and that those who paid full price at launch will be given free access to additional chapters. Those who purchase the game for its new price will have to buy these episodes individually.