Demon’s Rise appeared on the iStore with relatively little fanfare, which is a surprise because somebody over at Wave Light Games has obviously been putting a lot of love into it. For their first foray into the world of app development they’ve chosen an ambitious project.

The game promises to launch at a low price which will then increase as the developers add additional content, a strategy that has worked extremely well for other titles in the past and encourages players to grab it immediately rather than wait around, as they could be paying more later. Designed to replicate the feel of table top gaming, the development team speak very strongly about their beliefs that games on touch devices are yet to reach their potential, and that they are committed to creating a title that wouldn’t stand out if you spotted it on a console. To a certain extent they’ve achieved the latter already, with Demon’s Rise having a level of visual polish that stands out amidst a sea of retro-themed pixel games appearing on the market lately.

Graphically the game renders a 3D dungeon and character models across a hexagonal grid. The player is easily capable of zooming in and out of the screen at any time, which allows for a bigger field of vision or for more careful finger motioning and has the benefit of showing off some of the smaller details on character models. The environments in which battles take place are however extremely limited and largely interior dungeons in shades of grey and brown, with recycled elements cropping up time after time. The character design for party members is original, with regular Elven archers accompanied into battle by walking canons and clockwork golems with blades for arms. The menu system is extremely small however, and on mobile devices rather than tablets it can be a bother to read descriptive text and be finger accurate in these segments of the game, especially in shops. Although supported on phones as small as the iPhone 5c, the game feels optimised for bigger devices.

The music found in Demon’s rise is reminiscent of Dragon Age: Origins, putting a heavy emphasis onto drum beats and short looping tones to build tension. These run for a fair length before eventually looping, allowing for quite some depth to them. The passive screen between missions features an unsettling piece that verges on using human voices at times but could easily be really good synth work that invests the player. Sound Effects are equally well used, with background chatter adding depth to the games single shop that implies a bigger world than is ever seen on screen. Menus don’t use sounds, which can make you unsure that you’ve properly pressed the variety of options presented throughout the game, and some characters use spoken audio to describe their actions. Occasionally sound effects miss-fire and seem dulled compared to the music and vocal work, but overall the presentation is excellent in this category. 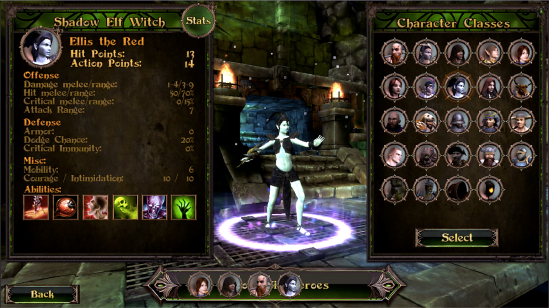 There’s a great variety in party choices at the games start.

Story elements are fed to you in text descriptions before and sometimes after battles, masking loading times. For the most part they are fairly generic but the game does gather a good amount of momentum as play goes on, with the player expected to stick with it for some time before things get moving. The basic premise is that your chosen party of adventurers have enlisted with a Dwarven king by the name of Adrun who is the latest in a long line of monarchs who has attempted to reclaim the underground ruins of Agnor, a once powerful city. Your journey takes you from the gates deep into this monster-ridden environment one battle at a time, and flavour text greatly adds to the impression that previous attempts have failed because of the sheer weight of monstrosities within. It’s a good premise that amounts to quite a broad variety of locations within one area, but allows for assets to be reused safely within the confines of the story. Don’t expect to go on a jaunt out into the surrounding forest areas any time soon, this is a dungeon-based game with camp and patrol missions within the ruins.

The gameplay of Demon’s Rise is very much inspired by table top gaming conventions, with each side moving all of their pieces in an order of its choosing, able to move, attack and trigger special abilities before ending the phase and allowing the other side to do the same. Many of these battles are simple ‘last man standing wins’ affairs, but there are some more complex missions included here with differing end-goals. Each of the (currently) 26 characters has their own skillsets and strengths/weaknesses to take into account. The walking cannon is a very long range weapon that can rain havoc on a mage from a good distance, but get an enemy in its face and it will be slag before you can blink. Loot is plentiful both inside and after missions, with monster drops supplemented by visible chests to claim on the map and piles of gold. Potions also litter some areas and ending a turn on one has the character taking advantage of a stats boost for a short period, a factor that enemies can also take into account and will often move to take advantage of. Enemy AI varies between surprisingly intelligent and woefully predictable, with many of the bigger more powerful monsters also having an air of stupidity about them whilst smaller faster units can be quite smart. It’s a style that I like to see implemented and allows for players to switch tactics mid-battle to deal with an assortment of monsters. There’s a shop to sell loot and buy a selection of helpful items and every character has multiple item slots for that loot to inhabit, although all 26 characters can’t equip all the equipment so a fair few junk items will surface. Party members gain experience after a mission (story or ‘patrol’ missions, which are used for grinding and loot gathering) regardless of if they survived the battle so you’re encouraged to try out new tactics. The trouble with this however was that I found varying a character’s role from the obvious usually led to a quick death, with perhaps each class too specifically focused for its own good. A plethora of game save slots allows for plenty of party replay with different squads however, and although the UI is built for bigger screens there are buttons available on-screen to help with some functions. Otherwise the game runs on an easy to use ‘tap’ interface with the in-battle hexagonal grid working very well for this method. 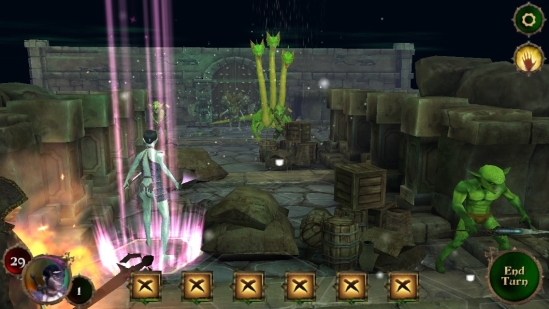 The action can be zoomed out to a distance of focused right into the fray.

Overall this title shows a great deal of promise, but at the moment threatens to topple over itself under the weight of the sheer amount of content it’s crammed in. Not so much a mobile title as a game you need to carve out a chunk of time for and really get into, pushing through a couple of missions and grinding a few levels before upgrading your party with loot you’ve purchased or found along the way. Compared to the drop in, drop out nature of other mobile titles this is quite a breath of fresh air, and for those looking for something in the same vein as Warhammer Quest with a moody adult setting rather than more cartoony takes on combat. Additional content has already been added since launch (including a rather nifty dragon made of bones to encounter) with more on the way. If you’re a fan of table top gaming or enjoy tactical RPGs this game is certainly worth picking up before the price increases again.