Knights of Pen and Paper is a hard game to tag a genre onto, it’s turn based but the real drive of the game is the opportunity to tailor the campaign to suit your own play style, deciding the difficulty of any event. Because of this we’re going to go along the Steam and call it a ‘Strategy’ RPG (which shouldn’t be confused with a Tactical RPG) since your strategy decides how you experience the game.

Developed by Behold Studios with a primary focus on mobile phones and tablets (although it is available through Steam for desktops) it’s a game designed to bridge the gap a little between the pen and paper role playing games of old (primarily Dungeons and Dragons) and the turn based early RPGs on the iStore. It’s also something of a send-up of both, meaning that there’s plenty of scope for satire throughout.

Graphically the game employs a faux-retro style similar to that of a 8-bit system, with lavishly constructed 2D sprites full of pixelated charm whilst still playing to the strengths of modern design choices and allowing for bigger sprites full of character. The design choice to put the characters physically seated at a table with the Game Master facing the player from the other side and showing the world they encounter behind them is extremely impressive and sets the pen and paper tone of events perfectly. Menus are easy to navigate with a quick finger or thumb, and the game plays in portrait or landscape mode depending on how you hold the device, making for a better experience based on your preference. Designs for characters are quite 90s in their look, with a selection of various stock trope bodies upon which to pin the hat of a character class when they play. The game also represses the need to make every player look like a ‘nerd’ and comes off the better for it.

Musically the game emulates a passable 8-bit soundtrack, it’s passable but not fantastic and entirely forgettable once you’ve put the game down. Different locations, battles and scenes all employ their own tunes however and the variety is appreciated. Sound effects are also used broadly, with different monsters having their own library. When exploring the world map the game signifies player location with a horse that travels around, the single most grating effect in the game is the sound of this horse galloping, which is a little like static noise at times. Menu noises work well however and add a sense of pressing down on non-existent buttons.

Combat is turn based.

The story in Knights of Pen and Paper is simple but brilliantly high-concept. You are simultaneously both the Game Master (GM) of a pen and paper fantasy campaign and the cast of up to four players. Together as a group they will forge their path through the beating heart of the sandbox Brazilian team Behold Studios has created for you, one story laden quest at a time. Each mission you undertake has its own small narrative and normally is self-contained, but the drive across the world map is powered by the player’s quest for adventure, loot and that sweet, sweet experience. It’s bottled the idea of playing Dungeons and Dragons with your friends in your bedroom at university or in the library at school perfectly. Small shout outs from players are also very in-keeping with this, with comments and jibes tossed around after actions. There is some debate as to whether the occasional spelling or grammar mistake slipped the net due to the language barrier for the developers, but I personally strongly believe that the quality of the writing and script elsewhere indicates that these infrequent mistakes are intentional and a homage to 8-bit translation eras that were common in the era they are aping.

Gameplay is a mixed blessing. I was this because it’s deep and rich in all the right ways but for longer play sessions the game will feel like a repetitive grind and slowly sap the fun out of the title. The best way to play is in short, no longer than an hour bursts between jobs or on the move. In this manner the game retains its appeal through to the last act, which is quite labour intensive. Early on it’s a blast however and discovering so many small systems working together is a pleasure. The crux of the game is the ability to GM your own story, this means that tapping the GM pulls up the options available to you in any location at any time. In a town these will include shops, crafting and other similar mechanics, whilst in the field these are whittled down to combat, travel and sleep. Sleeping restores HP and MP but is only a safe tactic in towns, in the wilds there’s a chance you’ll be attacked by a monster while you sleep and battles can ramp up in difficulty fast. Combat itself is turn based and each character can attack, defend, use and item or use one of four class-specific powers the player can level up (one of which is usually a passive ability boost). It’s as easy as tapping what you want to do and a target monster, or simply tapping a monster if you just want to shortcut a regular attack. Players can equip items of various kinds that you find, buy and craft in towns, and the player gets to mix and match a ‘player’ with a class, so for example an Alien as a Mage gets the passive bonuses of both base and class. You buy up to your party of four with in-game currency (which can be paid for with real money if you want to cheat but is not ever suggested to you by the game itself, which is admirable). Money also unlocks travel as each journey will cost you cold hard cash, and can be used in shops. Outside the main game itself this currency can also be used to upgrade the player table and add items to it to provide static boosts to the game itself, which is a brilliant feature. The real pen and paper feel of the title however comes from the rolling of dice to accomplish most actions, giving a randomised feeling to the otherwise quite pre-set environment that only a dice based game can bring. The most touted feature however is the battle selection option, where for much of the grind the game offers you select your own encounters, making the monster party to be as tough or weak as you like depending on what you think you can handle. It’s a clever idea but in practise it works out as more of an excuse to skip lower level enemies to focus on getting more gold and experience in a hurry. Quests are also selected by the GM and missions range from ‘travel to here . . .’ and ‘kill X monsters’ to more elaborate dungeon raids. Again the freedom in choosing what you do and when is the games biggest strength. 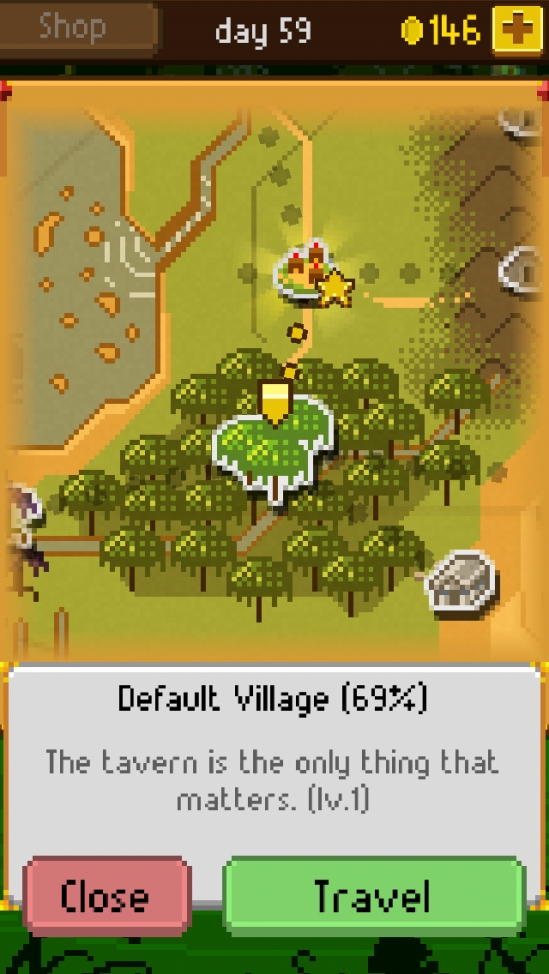 The world map is just the right size.

Overall it’s a brilliant little game to have in your pocket and a player can lose hours of their day in short bursts just filling out small quests or crafting an item here and there. The game can get repetitive in long bursts, with many missions being reskinned concepts of the same basic ideas, but the level of invention on display and wide variety of places to explore or monsters to encounter makes if a pleasure to play. An expanded +1 edition hit as a free upgrade to throw a whole variety of new content into the mix, and a sequel is now available (fittingly, 16-bit in theme this time) but with the price of the original dropping to free it’s the perfect time to grab a copy and take it out for a spin. Available now on iOS, Android and Steam.