Lili isn’t a new game on the iStore, but it does manage to remain one of the most beautiful, using the Unreal Engine to knock the infamous Infinity Blade series off of the top-spot for most impressive 3D world. It’s a vivid and well realised experience from the moment you first start the game.

Lili is a product of Bitmonster games, who have also produced ‘Gunnerz’ and more recently ‘Grav’ and is described as an Adventure/RPG hybrid, although it skews closer to the RPG genre with a levelling system, a unique combat engine and item purchasing. Consisting of only 6 members and established in 2012, Bitmonster are going to be a developer well worth keeping an eye out for in the future.

Graphically the game is gorgeous, rendering high quality 3D models that feature a high degree of design and lighting proficiency. Instead of masked faces (which many games use to avoid having to emote to a high degree) we are given eyes, mouths and expressions worthy of a pixar animation, and indeed the games characters look like a hybrid of Pixar and Studio Ghibli. Many of the characters, Lili non-withstanding, are made up of Spirits and Constructs. Spirits are nicely other-worldly and all wear Incan style masks, running around on spidery thin legs whilst Constructs are heavier and made of simple elements like wood and metal. Both feature a distinct style and can easily be told apart. Locations are beautiful and also fully 3D, with lighting affecting everything in an environment including the characters and bringing everything to life. Special mention should be made of the layouts for areas, which are easy to negotiate but still requiring exploration without becoming labyrinths in their design. Every character has a variety of animated poses and expressions and nothing about the games presentation feels even a single pixel less than a console title played on your mobile. Menus and interfaces are uncluttered and self-explanatory at a glance, if a little dull compared to the quality of the rest of the design.

Audio is a little bit of a let-down next to the visuals of the game, featuring genuinely nice orchestrations but rendering them with synth that makes the game feel like its score comes from a different gaming generation to its visuals and some are a little short before they loop. An orchestrated edition, perhaps available as an in-game purchase (the structure is already there as the game features IAP in addition to being a purchase in of its own right) would add the necessary weight to the soundtrack and bring the games quality up to the top-notch it deserves to go with the music that’s been written. People would pay it, I know that I would. Sound effects are less common, with none used with the games interface and few occurring in-game (there are no running or ‘collection’ noises for example), but those that are presented are captured in a nice crisp manner.

Characters have a ‘Wizard of OZ’ feel to them.

The games narrative follows Lili, who at the games outset has sailed to the supposedly abandoned island of Geos as part of an educational study into the magic effects of flowers that grow there. Discovering that rather than uninhabited the island is instead occupied by a town full of Spirits and their servant Constructs she is quickly talked into helping the lesser beings free themselves, something that they could never do without outside help. The writing on display here is excellent, with genuine sympathy for the Constructs quickly attained and a dislike of the Spirits pushed onto the player through seeing them act like general bullies throughout, even when going about day to day tasks. Lili herself is likable in a role that could easily have become dull or too blank as a conduit for the player to learn about the island, and there are moments of genuine comedy to be found.

Whilst the visuals of Lili make it stand out, the gameplay is certainly a draw. Unusually for the genre the emphasis has been placed not on violent encounters but on a combat system that sees Lili leaping onto the back of a Spirit after chasing one down and pulling flowers from their backs, weakening them enough that they can’t continue to pester others. This doesn’t kill them, but rather calms them down or renders them harmless. This all takes place in real-time while a grapple counter ticks down, acting as a timer. The Spirit can grow thorns and bombs which need to be tossed/avoided as necessary to keep clinging on and pulling away at flowers with a drag of a finger. Movement around the world is done using a simple tap once to walk or twice to run approach with movement and camera panning managed by dragging a finger over the screen, this allows for easy movement and most things are interacted with by using a simple tap. Don’t let the simplicity of the game fool you however, there’s plenty to discover and coins to be had for successfully finding chests or ripping flowers from Spirits (who can also be re-challenged to rank up to 3 stars for your performance). A shop sells different items to help you run, sneak and dazzle your enemies, as well as a number of stat boosting equipment accessories and a few IAP special items. The IAP isn’t a necessity but it does make the game considerably easier, and purchasing the item to double your income is advised if you don’t want to face a lot of grinding. Various collectables also fill out an optional sub-quest that you can ignore or revel in to your heart’s content. The game is also littered with small and sometimes hard to spot nods to other licensed properties, some are obviously placed in view as items to find with descriptive text, others (like an E tank from ‘Mega Man’ sitting on the top shelf of a locked room) are harder to find. 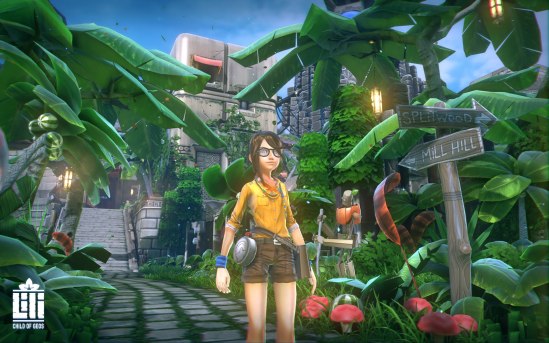 Environments and characters are rendered beautifully.

Overall, Lili is a luscious visual treat that contains a fun spirited romp through an imaginative world. It’s a perfect game to play with your children as it has a non-violence policy to its gameplay that feels at home with the child-friendly setting and controls extremely well. It’s still looking good and runs at full screen on the latest devices, and although the sound design is lacking the game is clearly worth the price of admission. A version is now available on Steam than features a slight visual upgrade and full screen support for desktops too, which can only add to the experience. Lili is something unique and special.