Heroes in Time, sometimes known as ‘SEED 3’, is part of a KRPG series from Chillingo Ltd that appeared relatively early in the mobile gaming boom. As such it mirrors a lot of the early promise that portable gaming of this type had to offer, and manages to fall into some of the same traps as other early titles.

Chillingo have published a lot of titles for i0S over the past five years and a great many of them have been licensed properties such as ‘Max Steel’ and a remake of ‘Spy vs Spy’. The SEED series by CH doesn’t appear on their current website and their turn into casual, smaller titles than the average RPG seems to have encouraged them to put a distance between themselves and this earlier franchise. SEEDs 1 through 3 were all relatively competent KRPGs in their own right, whilst SEED 4 was a mis-judged card game, perhaps because they sensed which way the market was turning at the time. At the time of writing all four games are still available for free through the iStore.

Graphically Heroes in Time looks great, it uses 2D pixel art to paint a semi-retro environment that contains a broad colour palette and pushed many small details into all of its backgrounds. Locations are all distinct, from towns to grasslands and caverns, each with their own tile-sets, environmental hazards and monsters to discover. Characters are rendered in the same 2D style and are distinct from one-another, making them easily recognizable in a melee from enemy units. They also have 2D illustrations appear alongside their speech boxes that show how very similar concept art and sprites actually come, with the two pairing perfectly. Character design has a European fantasy feel, mixed with some elements of Caribbean environments to add a more tropical flavour, especially in jungle settings. It’s a game that still looks good despite the amount of time that has passed for mobile gaming, although playing it on anything larger than a 3Gs will result in some thick black borders appearing on the screen.

Sound and audio are sadly not as amazing as the pixel art on this title, with the team approaching the game with a retro aesthetic they’ve obviously chosen to produce a chip-tune soundtrack that doesn’t live up to its potential. Much of the games music sounds oddly reminiscent of ‘Golden Axe’ on the Sega Megadrive (Genesis for you Americans out there) and as a whole it fails to live up to the sheen of the visual elements. Sound effects are similarly afflicted and often feel like they were purchased whole-sale from a developer for a 16-bit console. 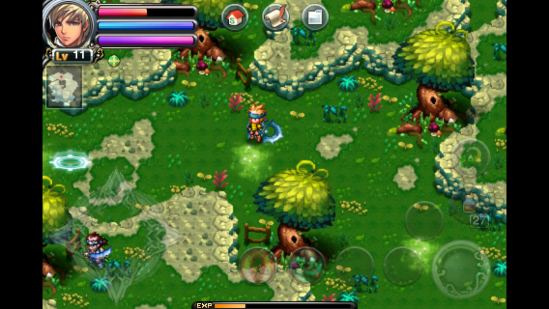 Big black borders will appear on devices bigger than the 3G.

Unlike most KRPGs, which have a habit of being relatively light on story elements in favour of promoting combat and fetch-quests, Heroes in Time manages to tell a relatively deep tale. Those elements are still present of course, but they are quite tightly inter-woven into the narrative premise which makes for a refreshing change when compared to games such as Zenonia or the early Inotia titles. The game opens on the eve of twin boys being born to the King of this fictional land, he’s at first overjoyed but upon later counsel from the court witch he realizes that the two will eventually lead to a war for the throne. The witch in turn advises that one of the boys be taken and slain, a plan that the King agrees to but that a knight overhears and attempts to foil by sneaking the baby from the castle. Hounded and backed against a cliff edge the knight is slain and the baby sent over the side to his doom. The action then picks up 11 years later when the King’s younger son encounters a feral child in the forest whilst hunting, and though his older brother thinks he is a fool, brings him back to court to educate and clothe him. Thus the action truly begins with the player taking the role of this once feral child, now a young man in the service of the prince, graduating into the royal guard. It’s an initially complex plot that soon settles down, largly concerning the unlikable older brother assuming the throne and the younger brother’s relationship with his unknown family member. The translation can dip in quality for some NPC chatter from time to time but largely remains well written, adding layers of interest to the games mechanics.

Gameplay is KRPG fair, with an Action RPG combat system mixed with multiple fetch quests and sub-missions to undertake. These will fall almost entirely into the ‘collect X items for me’ or ‘slay X monsters’ camps, but occasionally the game manages to throw in some more meaty side content. Early in the game you’re tasked with taking part in a battle against a savage people, doing so tasks you with killing 20 of them, but mid-quest your brother is kidnapped and the mission shifts gear into a more narrative-driven rescue mission. The world map is large and chunked into different sections that are all interconnected, and whilst the games map may look useless at first it later becomes vital for finding your way home if you neglected to set a teleport point there before leaving. Combat itself is handled well, although the controls manage to let the game down almost entirely in that they are too demanding. You need to be pressing exactly onto the action button or the direction pad to operate them, meaning that mid combat you can find yourself swiping at thin air when an enemy moves or worse, failing to attack at all and paying for it. This is a major oversight on the part of the games development and really cheapens the overall experience. I sampled the game using each of the different classes and found that the dual-wielder suffered the least from this flaw, but even negotiating between locations became a chore if a finger slipped whilst running around. Some of the online store elements were down when I played as well, meaning that support has stopped.

Overall as free titles on the early iStore go it’s worth a look, but the control scheme manages to cheapen the game considerably. The soundtrack will also grate in little to no time at all, but if you can look past all of that you’ll find a well meaning and well written KRPG that contains hours of potential entertainment.