Many people dislike the sequel to Dragon Age Origins, feeling that it was rushed out to capitalise on the popularity of the original. I won’t argue that it leaves something to be desired in terms of variety of locations to explore, but I will admit that I’ve probably played it more times to completion than its predecessor.

Dragon Age II is a very different game to the original, throwing out the handbook and rebuilding from the ground up whilst keeping the world and its lore intact. Importing saved data from the original and factoring in choices from that title made by the player helped to keep a direct connection between the two titles and would be implemented through an online ‘tapestry’ system for future titles in order to prevent system or console jumping being an issue. Dragon Age II is a vital play if you intend to spend time with Dragon Age Inquisition, as it lays the foundations for what will be the themes of the series going forward in a way that Origins didn’t.

Graphically the game is vastly different from the original, featuring smoother and more detailed character models whilst at the same time taking small steps away from the realism of that game. Metals and cloth no longer feel textured or lit in the same manner as before but still look suitably well designed with weight to them, whilst character facial animations are improved as the designers step away from the ‘uncanny valley’. Locations are few, and reused often, but their details are unique to themselves, meaning that you won’t encounter assets from the mountains in a cave or town. Character designs are among the most imaginative they have ever been, and returning characters who played bit-parts in the original and are now graduated to leading roles look notably more interesting and polished. Whilst the photo-realism has taken a step back, the game engine manages to fill the world with details and presents an even more accomplished character creation selection than before.

The games visual style is slightly more cartoon like this time around.

Sound is where this title really shines, with melodies not lifted from the original but some notes and tones borrowed to be worked into background noise when speaking about the past or locations visited before. Kirkwall (the location of much of the game) itself has a soundtrack that gives it character and manages to present high, fun elements and murkier depths as you explore. On many occasions the soundtrack is reminiscent of a movie or grand opera in the Wagner style, with people, places and items given linking themes. Sound is also excellent with superb voice acting from all involved, and for the first time the player character is given both a name and a voice, avoiding awkward silences or ‘Warden’ honorifics when referring to him aloud. Effects are visceral and more abstract than before, slightly over the top and better matching the amount of blood that is splattered across characters after combat.

The story of Dragon Age II is perhaps what will split the audience. It’s not an epic world-spanning sword and sorcery tale like the original, instead Bioware have opted for a more personal story regarding the Hawk family as they flee the Blight at the opening of the first game and seek sanctuary in Kirkwall, a walled city over the sea. At first the introduction is quite jarring, with a pumped up version of Hawk and his sister Bethany taking on a slew of Darkspawn in a scene straight out of a heroic fantasy novel. They fight, dive and dash around showing off the sheer power of the games combat engine before the scene is called out as a lie and the framing mechanic of an imprisoned Dwarven Bard being tortured for information post-game is revealed. He was their ally, and the Inquisition want to know exactly what happened in Kirkwall. What unfolds is a rags to riches story as an immigrant and second class citizen slowly works his way up to minor nobility and eventually the title of Champion through honest or nefarious deeds. Split over multiple years and jumping time between chapters, the story on display here is extremely personal and works well being set alongside the same location throughout. Ultimatly the main theme of the game is if magic corrupts by its very nature, and the tense political balance between Mages and Templar. Both sides come off badly overall from this standpoint, with only some characters on each side being evil or heroic. Players can side with one or the other or try to stand in the middle throughout, but the lesson here is that the road to hell is paved with good intentions. The characters you’ll adventure alongside are an assorted and finely scripted bunch, with Bioware taking advantage of their experience on Mass Effect 2 to give Hawk a male or voice that engages them in conversation and helps to draw out a humour that wasn’t as present in the originals cast. Avaline stands out as by far the best new character, a strong female role model and written perfectly for her role. 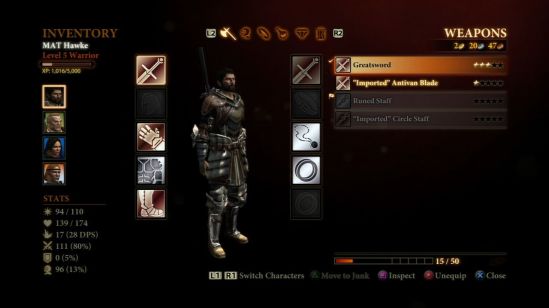 Gameplay has been streamlined.

Gameplay is where the most obvious changes from the original title can be seen, with some systems paired back whilst others are brought to the fore. Chatting to characters in your party by turning around to engage them in conversation is gone, but in its stead you can listen to them speak among themselves and even engage Hawk in conversation. Meeting with these party members in their homes allows for more private conversations that really get to the heart of who they are, and for the most part they are all deeply interesting. Each character has motivations, likes and dislikes which affect their affinity for you, moving them toward friendship or rivalry with special powers unlocked for both and additional bonuses when fighting alongside your lover. The use of Rogues for doors, chests and traps is still in abundance and keeps things interesting, whilst character management has been streamlined to allow for upgrades to character gear instead of purchasing new armour. Weapons and artefacts can still be equipped to them however, with classes bound by the same rules as in the original. Friendly fire is gone, so spells can be thrown happily without the need for duck and cover mechanics. Conversations have changed from a tree of answers to a simple wheel with an honest, brash and cheeky opinion available for any question based on your whims. Romance and speculation options also appear to forward character interactions. As your fame grows you take steps towards a good or evil mentality overall that can affect smaller ways people act around you and some missions later in the game, with a power-grab for control of the city not out of the question. Ultimately however the game is crippled somewhat by limiting the locations you go to and explore. By the end of the first chapter you will have been to everywhere this game has to offer, and two more chapters of backtracking and re-visiting them won’t enamour them to anyone. I’m personally a big fan of the ‘three years in one place’ scenario and even I find myself groaning at having to run up the same mountain or triggering the same spiders nest in the same cave for the fourth time. Combat has been overhauled slightly, with the major change being that instead of pressing the attack button and automatically approaching a foe and engaging in a fight, peppering it with special attacks, each blow is now mapped to a button on the controller (in the case of console versions). A second row of specials with their own cool-downs is still available, but mashing your way through mobs of enemies is something of an exercise in button bashing. Some will love it and others will hate it, it does immerse a player in the battles a lot more than fighting in the original game does, which after 60+ hours became almost automated.

Overall Dragon Age is not a bad game. It’s actually a very good one, just not the one people were expecting. The story, framework and world are all first rate and with a few months to add new locations to the title (DLC adds some excellent new characters, locations and missions!) it would be spectacular. Was it rushed out? Yes, but the core game is still one of the best you will play in the previous console generation. It runs faster, loads more smoothly and dedicates itself to displaying more on screen than the original ever did, and for that alone the game should be praised.