Also known as Alphadia III, Genesis strikes out a few noble firsts for Kemco, most notably a 2D combat engine for its turn based battles and a relaunch of a series that many had though had gone dormant after a first, mediocre sequel.

Kemco tends to release a lot of (frankly shocking) RPGs from a number of different developers under its banner. To play them all would be to bankrupt one’s self, and for the most part only a handful of them have been generously called ‘good’. The original Alphadia was one of the first RPGs to grace iOS and was a pretty good game in the mould of the original Final Fantasy. It told a succinct story, was a relatively lengthy game without too much padding and the art assets were cheery and colourful to look at. I was quite hyped when a sequel came out and saddened when it didn’t live up to my expectations, requiring borders to play on even a 3Gs screen and being overly full of pointless conversations spanning multiple text boxes when one would have sufficed. Still, it was a sequel to the originals story and it did give some closure to the (spoilers!) heroe’s fate in the original tale. Genesis makes a clean break from the original two titles but keeps the world and timeline intact, with similar themes of an energy crisis and the value of synthetic life.

Graphically the game launches to a great start with a 3D engine that wouldn’t look out of place on the Playstation in the middle of its original run (not too blocky but nothing too ambitious). Character models work nicely and the action is fluid, dare I even say fast, with the screen playing host to a variety of monsters in different sizes and shapes. There’s not a great deal of variarion in the monsters after the first hour of play however, and discounting bosses it becomes a case of seeing the same monsters in new colours or with a different ‘level’ to facilitate a stiffer challenge. The monsters that are on display however are varied in their forms (two/four legs, flying etc) and are representations of the same beasts last seen in 2D in Alphadia and its sequel. Outside of battle the game returns to 2D and although featuring some crisp large sprites and excellent illustrations for the characters the whole thing has an RPGMaker XP and above vibe to its graphical look. Menus are nicely laid out for touch interface and the game makes use of pinching and zooming in the camera in places to find hidden objects. 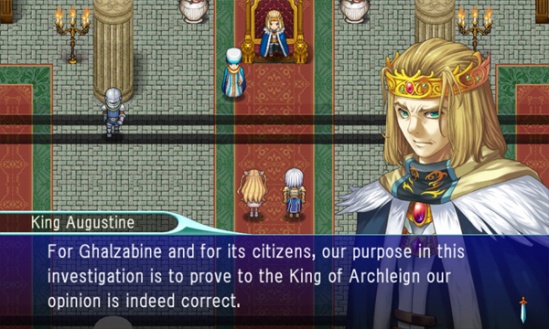 2D segments make up the bulk of the game and look somewhat like an RPG Maker title.

Sound also fairs well, with a synthetic soundtrack that never becomes grating on the long haul and manages to present a few memorable tracks. The title theme is especially nice, although the battle music is repetitive when coupled with the length of some encounters. Sound effects work well though they draw from the standard Kemco shared asset pool, presenting nothing different or surprising.

As mentioned, the story of Genesis makes a clean break from the ongoing narrative of the original two titles but keeps the setting. This is all established in a text crawl right out of the gate at the games start to avoid confusion. We then follow the adventures of protagonist Fray, who is tasked with joining forces with the military of a neighbouring kingdom in order to investigate a massacre that took place in a local town. Initially it looks like this is the work of synthetic life forms, but the closer they get to unravelling the mystery the more it begins to look like a shadow plot is in progress to disrupt both governments. The story itself feels relatively involving but the characters quickly fall into stereotypes such as the ‘plucky adventurer’, ‘jealous knight obsessed with honour’ and ‘chipper younger sister’. As has become the fashion in Alphadia titles, Enah – a clone and advanced form of the synthetic race, joins your party early. She fills the ‘mystery girl’ role and has been present since the original title in playable form, acting as a linking fabric to the original titles. There’s a cut/paste love triangle between the knight, spellcaster and hero that feels like it’s not been original since Final Fantasy IV did it (and lacks the best-friend angle), relying too much on both parties being too innocent to actually click that they’re in love whilst everybody else can see it. To a lesser extent that Alphadia II, the game also suffers from being overly wordy. I don’t mean lots of character banter and dialogue, I mean one message stretched across multiple conversations between different characters when it would have only taken the one. This I believe is a translation issue more than a fault of the games design however, as a soundtrack in the original language is available for key scenes and helps to better set the tone and pace of conversations even if it can’t be understood.

Gameplay is very stereotypical. Characters explore the overworld, engage in random encounters and loot chests. A nice feature is the addition of pinch-zooming on the immediate area around the hero in order to reveal hidden shiny points that can be used to unlock bonuses and cheats in the games cash-shop (yes they can be brought with real money too!) I managed to find enough to never have to pay out myself, but those in a hurry can certainly find benefit in this system that’s less in-your-face than other money based shops in RPGs. A mini-quest system also exists where you can accept one NPCs request at a time and solve it for them for a reward. I found that grinding a few of these made the game progress very easy, especially when they are all solvable in the immediate area. Combat is flashy with its 3D engine but completely traditional turn based fare. It does include a combo meter and a reserve member can be called to deal team attacks once his or her meter is full, but otherwise the basics are all in place. Magic and Special moves are stored in separate menus, and largely the auto-battle function will see you through safely with you having to drop out and heal before resuming it for bosses. The elemental system has been scaled down from previous entries in this series, now only three elements matter in a rock-paper-scissors style where as before a seven pointed system was in place. Players can still buy, charge and equip clear rings with magical elements to allow characters multiple magics to call upon, and character to magic levels are still independent. The game uses a virtual d-pad or a click to move to a fixed point system that both work well, although the panning can be a little choppy.

Combat is extremely easy, with mashing attack or ‘autobattle’ being a viable option throughout.

Overalls the title is a return to form for the series and offers a solid but unexciting roleplaying experience in line with early Playstation releases. The story isn’t shot-out-loud amazing but it never sinks to the depths of the Kemco heap, and characters retain enough charm to keep the game amusing. Alphadia Genesis has seen release on Android and iOS as well as Steam and the Wii-U, making it something of a standout title for Kemco. EXE Create, the devs behind the game must be very proud of what they have accomplished and with a Genesis 2 on the way it will be interesting to see if the series makes a second leap forward or maintains the trend of bad sequels.