The second title in the Final Fantasy series is often considered something of an ugly-duckling when compared to the other titles in the series. This is largely because of the shift from a conventional levelling system into something altogether more complicated, but with hindsight it makes just as many leaps forward as it does steps back.

Released a single day short of a whole year after the first title, Final Fantasy II was the sequel nobody had expected to happen when working on the original and allowed Hironobu Sakaguchi to make the jump to director. Now firmly in the driving seat he put the focus on something that had made the original title stand out from Dragon Quest, its chief rival. Story. Final Fantasy as a series would be about telling a story, and the brave decision to dump all existing characters, locations and events in order to focus on the new would be a precedent the series would follow to this day.

As with the review for the original Final Fantasy, the focus of this review will be primarily split between the original NES release and most current release onto iOS and Android devices.

Graphically the second title on the NES was something of an upgrade, introducing actual characters in place of stock classes and given each of them a unique look to keep them visually separate from one another. Monsters were designed to be more interesting and appeared outside of boxes, in fact the battle system looks a lot closer to a modern turn based structure than it did in the menu-driven original. Battles now also feature backgrounds that match locations, although a great deal of black space was still employed. Over the years significant improvements have been made to the game in the area of visual presentation. The Wonderswan and PSOne re-releases featured sprites similar to those used in Final Fantasy IV and V, whilst a bigger colour palette and large chunky visuals made their way into the PSP edition to capitalise on the widescreen ratio. The iOS version uses sprites similar to these and they present a lot of the characters as designed by Amano in his overly-flowery style. Locations are varied but still stick to the genre staples of Forest, Mountain, Caves, etc, and menus have been redesigned to be a little more touch-native. In total there have been 14 re-releases of the game to date, and it can be expected that the number will only continue to grow, evolving the games visual identity as it does. At its core the title is a Medieval fantasy with a western European style to it that is in keeping with the original games feel. The four main characters are enjoyable different and visibly show their potential for different functions on the battlefield. Guests to the party are also inventively drawn and their specialisms are self-evident too. The ‘Origins’ bundle on the PSOne featured a computer rendered cinematic opening that also makes its way into the latest edition for added flair. 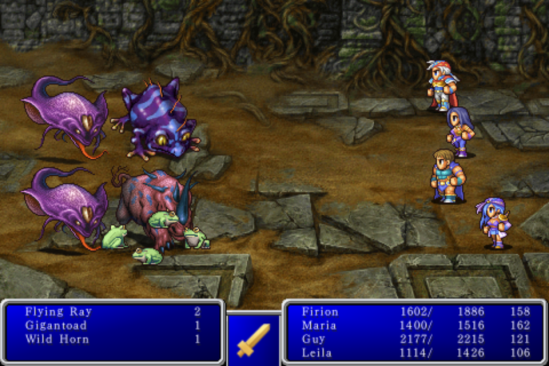 Battles are still turn based and magic is still purchased through shops and equipped to characters.

Audio is less memorable in this title than many of the other big Final Fantasy titles, but some tracks manage to work their way into the series as a whole. The Chocobo theme arrives with some flourish and the Prelude is firmly established as a series staple. Rebel and Imperial themes are cinematic in their sound and scale, giving both sides of the conflict a solid tune with which to relate to them. Audio has undergone a similar upgrade for the latest port and sounds better than ever. Sound is largely the same as that found in the iOS remake of Final Fantasy, with many of the same effects used for the same purposes. It’s a solid if not memorable game for audio.

The plot of Final Fantasy II may feel dated by today’s standards, but it is extremely relevant in setting up many of the clichés that we see in games today. Evil empires, young orphaned heroes and other such tropes cycle back to games of this type in this period. Final Fantasy II opens with four survivors from a burned village in hot pursuit by the Palamecian Empire. No sooner are we introduced to Firion, Maria, Guy and Leon than they are thrown into immediate battle against armoured horsemen and moved down despite the player’s best efforts. This has a second to sink in before all but Leon are revived safely in the town of Altair by Princess Hilda, who heads up the Rebellion’s efforts to overthrow the Empire. The three youths want to join the fight for obvious reasons, but she denies their request due to their age and relative inexperience. Not to be outdone the three set out to search for their missing friend but instead find a dying Prince Scott who warns them a man named Borghen has betrayed the rebellion and become a general in the Imperial army. This news, and the pressing worry that the Rebellion could be attacked at any time causes Hilda to send the three unknown faces on a reconnaissance mission to the local mythril mines. The story that spins out of these circumstances continues to evolve and adapt to bigger challenges for the heroes, and includes such memorable moments as boarding an Imperial Airship to burn the engines before it can launch an attack and the revelation that Hilda is at one point replaced in secret by a monster. Various characters join on a temporary basis and travel with the party, many meeting nasty ends and teaching the youths lessons about sacrifice, loyalty and the importance of their family before eventually the reappearance of Leon throws even more tension into the mix. Sadly the story’s structure is let down by brief explanations and only a small amount of world building. For the time this was a cutting edge amount of plot, and it holds up for the most part by today’s standards to make an enjoyable romp, but a remake is yet to introduce a new script to fully take advantage of the drama on display. The ‘Dawn of Souls’ remake on the Game Boy Advance includes a bonus mission at the end of the game that unites the deceased allies in the afterlife to defeat the spirit of the Emperor and prevent him from ever returning, which whilst not an essential play is something fun to add to the mix.

The ‘ask’ and ‘remember’ mechanic is actually very good.

Gameplay is perhaps the most diverse and biggest tangent that the Final Fantasy series has ever dared to go (to date) and whilst it retains the standard overhead exploration and turn based combat rules of the genre it strikes out in a very different direction on multiple subjects. For a start the players can remember key words from conversations and ask about them when speaking to NPCs to gleam new information or forward the plot. This adds a puzzle-element to the title akin to point-click adventures and helps to allow the game to evolve in interesting ways. NPCs are often dull and spoken to only once in games of this nature and the remembering system helps to keep the idea that anybody could say something different at any time or hold onto crucial information alive. Chocobos are introduced as mounts with which the explore the world map and a variety of vehicles are employed at different times throughout the tale. Whilst combat is still turn based the act of levelling up is massively changed. Characters instead have proficiencies for every action they do which increases something about their person. Attacking with a weapon earns experience with that type of weapon and dealing damage causes the strength of the character to rise. Taking damage increased defence and casting spells increased spell levels as well as MP reserves. It’s ingenious but requires a lot of work to form a balanced party and made the games battles into something of a grind. In some circumstances its more useful to fight your own characters to increase their HP and defence than target a monster. The game has a glitch that could be exploited all of the way through to the PSOne edition that allowed you to set an attack, cancel it and still reap the experience, speeding things up considerably, but the iOS version has fixed this.

Overall this title is somewhat overlooked whilst also enjoying a high port rate from Square Enix. It’s not the best title in the series but it perfectly suits the nature of a mobile title and the deeper, more layered experience system for building characters sits perfectly with playing on the go over the long term. Dip in, level something, leave. Compared to the original game it is a huge leap forward in many areas both in gameplay, depth and storytelling ability. I would recommend that anybody with an interest in classic games give this one a look.