Craving more 2D Suikoden flavoured goodness after completing the first two games on Playstation Network? Good news, Exit Fate is here to pick up the slack and its 100% free.

Exit Fate is the first title covered on MBU created using the popular RPG Maker series of games creation toolkits. Games made with these vary greatly in the amount of effort that has been put into their production, with a great many of them relying on pre-supplied graphics (called RTP) and the amount of polish a game has received to take it away from these base standards is usually a good indicator of if it’s worth your time. However the easy use, customisation and access to these tools mean that fewer people need to get involved in game production and one person can tell the story they’re trying to get across. There are some real gems in the RPG Maker community and hopefully sometime in the future I’ll be able to cherry-pick more of them between other reviews.

Graphically, Exit Fate takes a lot of its inspiration from Suikoden II, with custom sprites based on the animations and proportions of that title and many backgrounds ripped straight from the game. It’s not an uncommon sight to see assets reused in this way in RPG Maker titles and they don’t feel out of place. Locations are pitched carefully and laid out in interesting fashions, and the serious tone of the title feels at home with its visual representation. Custom hand-drawn 2D artwork adds a layer of originality to the title, with every character not an NPC given a lovingly drawn portrait and battle animations/monsters drawn in the same style. These touches make the game stand out and lend it a professional touch that ripped chipsets could have easily undermined in less confident hands. The system graphics are lovely and very traditional whilst feeling crisp and well suited to the theme of the title. 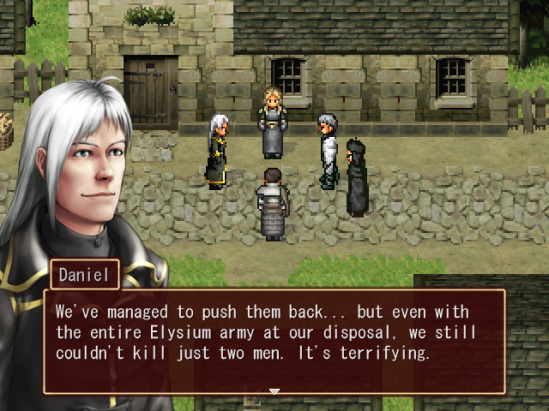 Audio in the game is excellent with each track being well suited for the tone of an area or scene being set, but it’s all been taken from other games. Elements of Secret of Mana and Final Fantasy Tactics are plain to see, especially on the battle and title screens. The audio is similarly a mixture of free-for-use sound effects that have circled the RPG Maker community for years and SFX from other titles. As I stated before it’s a shame because the audio fits this game perfectly, but unlike graphical elements it’s hard to separate the original use of a musical piece from one’s mind when playing.

The plot and story arcs of Exit Fate have been talked down in other reviews because of their similar plot beats to the games primary inspiration (Suikoden II) however playing both simultaneously this past few months I can attest that they are both quite different whilst sharing a few themes in common, such as friendship and the difference between duty and what’s right. The game centres around Daniel, a ranking military commander in charge of a portion of the army. He’s fighting for a better world because he feels that it’s the right thing to do, but is growing ever more conscious of the idea that ‘fighting for peace’ is a flawed notion and feels that at heart he is a pacifist. When one of his two best friends is promoted to the rank of General they begin to drift apart because of these beliefs, and then a coo occurs in the field that sees a standard military action transformed into the beginning of a takeover on the part of his nation. Exorcised and framed for betraying his country, Daniel tries to make sense of what is happening before eventually accepting that in order to do what is right he will need to bear arms and command a new force against his former comrades. It’s well written and good solid stuff. I won’t lie and say some similarities aren’t there, especially then your chasing down papers that have been stolen from you before venturing out to fight a mist monster, but these are few and far between. Unlike the Suikoden series, Daniel can speak and expresses himself very well, allowing the player to become better acquainted with his morals and ideals. Some other characters feel one-note, but for the most part the games myriad of recruitable faces each come with a fleshed out back story and sense of individual character. Ayara, a loyal member of Daniel’s original command stands out as a particularly well written character and highlights the games ability to make genuinely likable characters, whilst an insane scientist serves in the place of a mage to teleport you between locations. 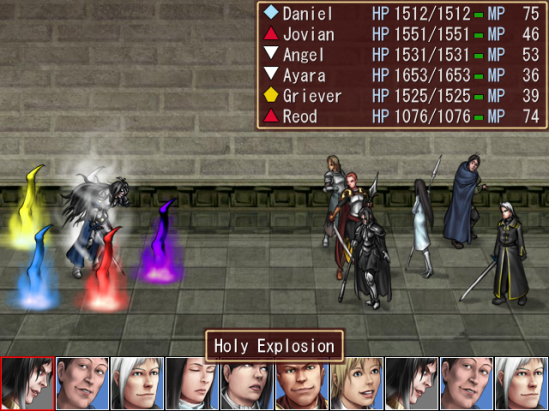 The combat system is a little slow, but only because of so much going on.

Gameplay is a mixture of different elements. The worldmap features exploration and encounters similar to any other JRPG, with the added wrinkle being that you can pay your way out of most encounters before suffering from being forced into a battle. The game does have a high ratio of combat to steps taken, but never felt overwhelming. Like Suikoden characters can be upgraded with new gear and their weapons sharpened to become more effective (this time split between damage, critical chance and hit ratio options) and can carry a limited number of items on their person. Unlike Suikoden and the game’s biggest strength is its magic system. At the start of combat characters have low MP which builds every turn until enough is stockpiled to cast the spells you have brought. Spells are communal and you can cast each one once, meaning that buying more than one means multiple uses per battle. Some characters are restricted to certain spells and leftover MP and healing magic is used after battle to restore any damage suffered in a manner similar to the Tales series. This makes the higher combat ratio much easier to cope with and adds layers of strategy unlike anything I’ve seen before or since. Otherwise combat is turn based with the order displayed along the base of the screen and each character’s turn options in the top right. Characters have emotional or story based links to others and can combine for joint attacks of different kinds based on what party you field at any given moment and nine characters can join you in battle. This also functions in reverse, with enemies on a team causing a lowering of stats so it too plays into the games tactical choice of party. Battles between armies are taken wholesale from Suikoden II, but when the system there is so good (and largely riffing off of other tactical based titles itself) this is less of a sin and more of a necessity when building a game in the manner of that series. That it’s included and not simplified to the rock-paper-scissors battle type of the original Suikoden game is a sign of dedication as that would have required much less time and effort. There’s a ton of characters to recruit and much of your play time will be taken up finding and discovering which strings to pull in order to recruit the hold-outs.

Overall Exit Fate is an excellent game held back by art and sound assets taken from other titles. It is however entirely free to download and play so it’s hard to hold that against it. Ultimately a re-release with entirely new graphics over the existing ones and an original soundtrack would justify a paid edition of this title because it’s enjoyable enough in other ways to replay even if you’ve already completed it once. Exit Fate is exactly what it sets out to be, a great game to play when you’re jouncing for more Suikoden.