Where the original Suikoden was a classic marred by a rough transition to the Playstation, its sequel is a masterclass of 2D gaming. Big beautiful sprites couple with outstanding storytelling to produce a game that manages to stand among the Final Fantasies and Dragon Quests of the time with pride.

According to the game developers at Konami, Suikoden II was written as a potential master-RPG for an in-house console that never saw the light of day. When the console was scrapped SII was shelved and the later choice to begin development on a Playstation RPG saw them approach the original writer to bring the game out of mothballs. He however produced a prequel script which he felt would allow them to set the groundwork for SII and better get to grips with the games development kit. This prequel was released as Suikoden to massive acclaim and pathed the way for Konami to release Suikoden II onto the Playstation in 1998.

Graphically the game is visually reminiscent of the original Suikoden, however an additional layer of detail has been added to almost every aspect. Character sprites are still large but their animations are fluid and plentiful, allowing for great depth of emotion to be displayed. Background art is designed to be beautiful, with towns and dungeons each being extremely distinct and visually pleasing to the eye. Shadows are employed to great effect and clouds drift over the worldmap. One dungeon early in the game sees the player explore a walled garden that serves as both ruin and maze. It’s finely crafted and pretty to the eye whilst showing how far the dungeon designs have come in relation to the originals linear approach. Occasionally cutscenes will play out in early CG renders that haven’t dated as well as the 2D graphics, but they are kept extremely short and used to add emotional weight to certain sequences. Character portraits return and are in better detail and extremely well drawn in a manga style, avoiding the gender confusion some characters faced in the original title.

Graphically the game has a huge leg up on the original Suikoden all-round.

Sound effects have been largely re-recorded from the original title, working in a crisper and more focused format. Some of the sillier elements have been jettisoned in favour of new sounds that keep to the tone of the game, whilst those that have been retained are largly scrubbed and cleaned to match the quality of anything new. Musically the title uses new and remixed old tracks to give a sense of continuation and these tracks have been changed enough to feel fresh and original in their own right.

The story in Suikoden II opens with the player character (this time no canon name is given) and his best friend Jowy as members of the Youth Division in the Highland Army. Things quickly go south however as their whole camp is wiped out by their own side in what turns out to be a move on their government’s part to incite open way against neighboring kingdoms. Escaping but separated the player is then found by Viktor and Flik, two heroes from the last game whose ending was left open and who have been working as mercenaries for the free cities. Here the player begins to gain an understanding of how others perceive his nation, and slowly events begin to unfold that cumulate in both Jowy and yourself gaining equal halves of one of the True Runes. As a stand alone title this game works perfectly well and emotes great amounts of story told exceedingly well throughout, but as a sequel, incorporating elements of the original game and its world, then piling in returning cameos and themes it’s a master class in storytelling. Needless to say I won’t be spoiling any of it for you here, but Suikoden II manages to make an epic tale of clashing armies feel uniquely personal very quickly and holds that sentiment throughout.

Gameplay has also had some face-lifting from the original title. Combat is now even faster and equipping characters with items feels more fluid and better conceived. Multiple lesser runes can be equipped to character to make them more versatile and some are unique to particular people you find, which serves to help you customize your party to your tastes. You can also re-order your party at any time outside of combat, preventing duff layouts from causing unfair deaths. Battles have seen the biggest face-lift however, with them now taking on a fully-fledged Tactics RPG style that works much better than the original’s rock, paper, scissors approach. It also allows for you to better see how individuals affect the format of a battle and many plot revelations occur through these scenes. Some recruits for the new 108 stars of destiny also can only be encountered mid-battle and drawn over to your side through your actions, making battles feel even more relevant. Unite actions return in battle as well, with there being even more crazy combos to unlock by pairing characters together with a shared history or romantic inclinations. Notably dungeons are now non-linear and contain puzzles that must be solved before you continue rather than simply raising the stakes in terms of enemy encounters and calling it a day. Some areas are huge and require real exploration, rewarding those who do so with rare items. Mini-games, in particular gambing, make a return too. Overall the whole thing feels more balanced with experience and currency never in short supply or forcing the player to grind them for longer than a handful of battles to progress. It’s telling of the overall quality of the original however that the best new feature for most gamers will be the addition of a dedicated run command instead of having to have a character equipped with a special item to do so. 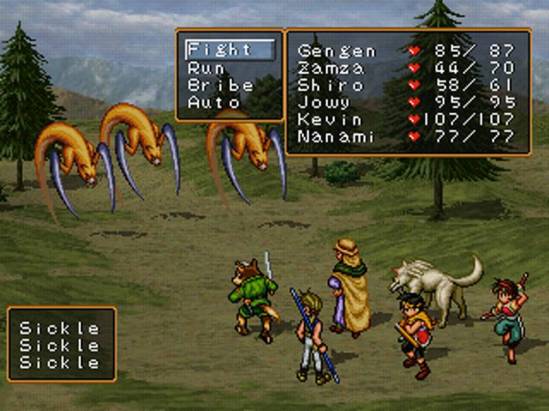 Combat is still awesome, but now runs faster and is a little deeper than before.

Suikoden II is one of those games that saw a limited release on the Playstation in Europe and as such is quite hard to find without being willing to pay a hefty sum of money. It has however recently been released onto the Playstation Network as a part of their classics range and is compatible with most Sony systems including the PS3, PSP and Vita. I recommend playing through a PS3 rather than a smaller screen in order to better appreciate the smaller graphical flourishes that otherwise might be missed. For a budget price tag it’s a sure-fire purchase.