After the release of Grandia expectations were high for a sequel. Game Arts had created a fast-paced title with the spirit of fun at its core and the follow-up upheld these ideas for the most part while layering on more mature tones. A must-have for Dreamcast owners, players on Playstation 2 or the PC would be sorely disappointed.

Initially released for the failing Sega Dreamcase, Grandia II was met with positive reviews on launch but a troubled translation period led to the Playstation 2 and PC versions missing their mark. By the time it saw release onto the Playstation 2 SquareEnix had launched Final Fantasy X and changed the landscape for JRPGs on the console, significantly raising the bar from where it had been two years ago at launch, and PC gamers were more accustomed to the depth of WRPGs such as Baldur’s Gate by this point. Texturing and freezing issues didn’t help either and what most players encountered was a glitch product that was woefully behind the times.

Graphically Grandia II does away with the 2D sprites on 3D backgrounds employed by its predecessor and instead embraces a fully 3D engine. This allows for some more complex environments than the original but ultimately the character models suffer from a lack of detail. Mouths in particular are conspicuous by their absence in-game and this is where much of the dislike for the art style was heaped at the time. The design for menus and 2D assets such as character portraits is very good, with a more adult influenced tone than previously seen and similar to teen-orientated Manga such as 3×3 Eyes rather than the original’s Ranma 1/2 inspired look. Special mention should be given to the in-battle attack animations, which seamlessly slide into full FMV in some cases to really show off the power of larger attacks. That the game does so without a blip in loading times is truly fantastic when even Final Fantasy X paused to load its cutscenes. Overall it’s a visual style that creates some bland elements but adds up to a cohesive world where some of the later party members are visually memorable. Special mention should go out to small rodents that inhabit some dungeons in the game with lights on their tails that illuminate areas dynamically.

Sound employs a small amount of spoken dialogue that has employed actors used to the tone of the game, making it a significant improvement over the original. Some sound effects return from the original, as does the fantastic ‘Grandia Theme’ which really does rival anything put out by other studios of the time as one of the best tunes in gaming. 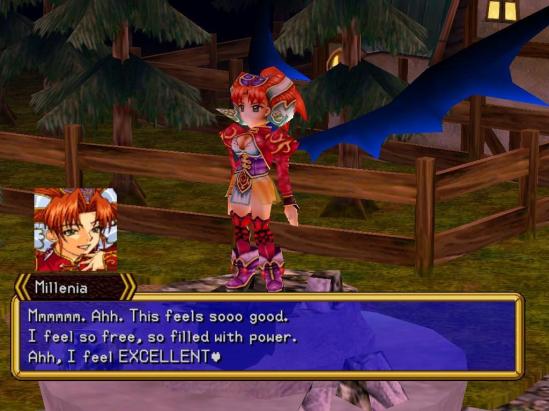 Mouths may be optional but the character designs are quirky and fun.

The story of the game focuses on Ryudo, a type of mercenary called a Geohound who is hired to protect and escort temple girl Elena to an important ceremony. She is a devotee to the god Granas, who is said to have fought and destroyed the evil god Valmar near the dawn of creation and to who the whole world appears to be indebted. Unfortunatly things go wrong when Valmar begins to reincarnate himself in pieces spread throughout the land and an adventure starts that sees these two characters trying to prevent this from happening. Initially the games story appears cliché for the medium but as it goes on new dynamics are introduced that keep it from feeling stale. For the most part the game is a town to town romp where you solve the particular threat to each location before moving on, but characters such as Millenia provide tension, comic relief and plot twists to the formula. Story is certainly the strength of this title, with the player invested in where things are going and what will happen next in a manner that serves to rivet them to the world from start to finish. The handling of themes such as religion and good versus evil is also excellent.

The gameplay of Grandia II sees some simple puzzle solving in the exploration and dungeon crawling elements of the game that amounts to little more than approaching an obstacle and pressing a button to remove it. This is something of a let-down after the more complex puzzles of its forbearer and makes a reliance on labyrinth-like dungeons necessary to keep the experience feeling worthy, coupled with a high encounter rate. Luckily Grandia II sports one of the best battle systems in gaming, an evolution of the original’s timeline orientated system that puts the focus on combos, critical hits and blocking (the defend option for once being useful and not a complete waste of time by restoring a small amount of health when used). Spells and Skills still use separate pools of points to power to allow for liberal use, and everything can be increased in potency through use and the spending of battle-won currency. Most of the battle system is unchanged, but allowing the player to choose to level underdeveloped abilities it extremely handy, and passive abilities can make elemental spells absolute powerhouses even at lower levels if used correctly. 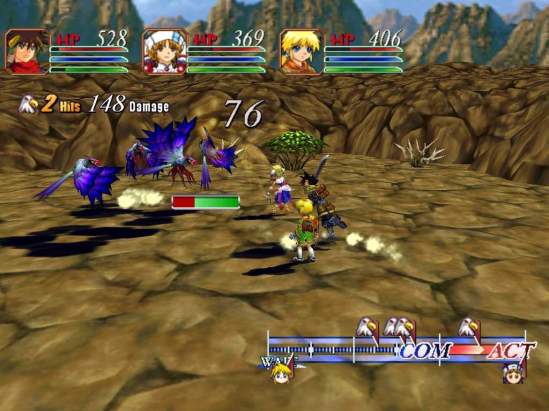 A battle system even stronger than that found in Grandia – definitely something special!

Overall Grandia II is a pleasure to play if you can look past its visuals (by today’s standards even the Dreamcast original looks dated) and at the story behind it. The battle system is still fantastic and fans of the JPG experience aren’t going to be disappointed. I would recommend sourcing the Dreamcast original if possible as it does offer the best experience, but those of the PC and Playstation 2 are tolerable and patches do exist to run the game on modern Windows 64 bit systems. It’s not as great as its predecessor, nor as well received, but I’d advise people to go out and give it a go for themselves before writing the experience off entirely.