Now that the original has been reviewed it’s time to roll up our sleeves and dive into the vastly superior experience that is Arc the Lad II. A game so ambitious and so very well presented across all levels of its design that it might just hold the title of best Tactics RPG of all time were it not dwarfed by the fandom of the Final Fantasy crowd. Arc the Lad II is a labour of love from a studio that had the balls to send their first Playstation game out there as a prelude and technical demo for what was to come, and we love them for it.

Arc the Lad II picks up a few months after the ending of Arc the Lad, however in a twist that nobody would have expected and a wonderful narrative mislead, you do not retake the reigns of Arc and his friends as they try to take down a government possessed by an evil figurehead. Instead you play as Elc, a citizen of this empire and a young man with his own problems. Elc is a Hunter, a mercenary who takes on jobs posted on the local bulletin board, and the highest reward is for the ‘terrorist’ Arc and his crew. The twist being that for the first half of this huge game Elc and those around him honestly see the original games heroes as the villains, and clash with them on multiple occasions. It’s handled very well too with the player forced to watch as our heroes meet and don’t settle their differences and team up immediately, making you cry out as the plot diverges again. Masterful storytelling plays with your expectations and this game is full of it. Especially in the knowledge that you’ve imported the party’s items and experience from the original.

Graphically this is a big step up from the first game with vibrant colours in place of the browner environments of the original and character designs that are ahead of their time in predicting trends. Fans of anime such as Naturo will see Shu and know he’d be right at home with the fangirls. There are now huge towns and cities to explore rendered in great pixel art, as well as a map to walk around and seek out new locations for each continent you fly to. CGI cutscenes make a return, though sadly they still don’t hold up as well, and character art keeps things firmly interesting as dialogue rolls in. A shame is that the original cast and some returning monsters escaped being redrawn and instead are lift wholesale, clashing a small (but hardly noticeable) amount with the better sprite work of the sequel.

Elc makes for a likable protagonist.

Sound effects have for the most part been lifted from the original games track, though that could be considered a good thing since they were well recorded and original for the time. Music is beautiful and continues the trend of being orchestrated, with Arc’s theme still being trumpeted on the title screen to full effect and pulled in at moments of pure heroism in the manner of a movie throwing out the Bond theme as the action reaches a climax. If it’s not broken, don’t fix it.

With everything being bigger and better the story takes a major upgrade for part two of the series, giving us likable characters and mysteries we have to work our head around. Elc is able to control fire as the only survivor of a clan that was wiped out, he’s also an escapee of a testing facility for gifted children and a hardened character for a young teen. He meets up with Leiza and and her pet wolf/protector Pundit while on a mission at the local Skyport and finding that she too is on the run (this time from a crime syndicate similar to the mafia) finds he has to help her. Leiza can recruit monsters to your force, greatly adding to your available part options and along with Pundit and Shu a fellow Hunter and Ninja you set off on an adventure unlike anything I’ve seen before or since. It has themes touched on in Final Fantasy VII, Akira, and more all handled with deft care and attention. That Arc and his friends don’t appear until multiple hours into the game, and then as villains, only adds to the layers of narrative complexity on display that you slowly unravel like a ball of string as you continue to play.

Combat is deep but feels light and breezy.

Gameplay sees the most revisions, inventory is still limited but the battle system is faster, more complex and at the same time more streamlined than ever. Taking a leaf from Shining Force, different weapons have differing ranges and characters normally have one or two kinds of weapon to specialise in. Specialising happens when you level up in using that weapon type and through using that one item, dealing more damage more accurately. Spells and characters level in a similar manner this time around meaning that you will want to experiment for what works for you and then plough right into making it as powerful as possible. Item and weapon crafting allows you to do great things too, including taking those crystals from the first game you found and melding them into a jewel capable of removing MP cost from attacks, a super powerful thing in the hands of a mage or healer type character. Monsters are all recruitable in addition to the massive cast of characters, and have evolutions and skills of their own. You also no longer commute by map, instead exploring massive areas on foot and some of the best dungeon designs come out of it, nipping in and out of battles as you explore areas.

Extra content is again on display here, with the 100 floor dungeon making a return, optional side quests for every character, minigames and Hunter jobs which take the form of bounties for creatures and whole mini-quests with multiple endings depending on your performance, all adding up to an eventual hunter grade. There are hundreds of these quests and each and every one feels unique and different with most of them having established a plot significance and in-world logic. Finding genies to summon into combat also returns with some additional faces rounding out the crew. Unlike the original where you could field pretty much the whole cast, you have to select a party to take into battle with you in Arc the Lad II, and each changes the dynamic of the battle in different ways. 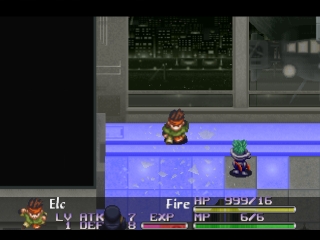 Status bars tell you everything you need to know in a battle on the fly.

Arc the Lad II is also compatible with Arc Arena, meaning that you can export a save file into the arena, level up your monsters and undertake challenges then return to the main game and play on with added items and experience. The benefits of this system (not seen before or since) and the quality of this special CDs content can’t be underestimated and it fits right in with the other elements of the game seamlessly without breaking the games balance or pacing.

Overall it’s hard not to view Arc the Lad II as a masterpiece on the Playstation. A treasure that most RPG fans haven’t played yet but can easily access through the Playstation Network for PS3 and PSP systems along with a working copy of Arena and the original game. You even get to save your game to export more data to Arc the Lad III on completion, but that’s a review for another time. Needless to say just taken alone this is a splendid experience, as part of the event leading into it with the tools surrounding it to boost the experience even further its almost the perfect example of a tactics game. If you have even the slightest interest in good games, tactics or RPGs you should get out there and download this game immediately.