It’s always nice to see a sequel pop up a year or so after you’ve deleted a title you’ve completed and enjoyed from your phone, it tends to show that developers have spent some time sitting down, listening to any problems people had with the original and fixing mistakes whilst building their world for a sequel. Sadly this is not the case with Alphadia 2.

Alphadia II is a train crash of a game that manages to take a fairly interesting premise and drive it into the ground by making the very act of playing it dull. The original Alphadia was a pretty average if enjoyable title that got by on the early iStore and Android markets by being everything that the original Final Fantasy was and a little more. Tastes have evolved quickly in the mobile market though and now we’re seeing ports of fully fledged console games that have been rebuilt for touch devices rather than shoe-horned with virtual controllers and whole games built exclusively for the medium by developers who have attempted to push the boundaries of what we expect on our phones. Four years ago I was over to moon to find a port of the original Final Fantasy that worked on my (non-touch) phone, with low grade sprite work straight from the NES days. Today I’m finding fault in Final Fantasy VI on my iPhone because the character’s legs don’t vanish when they walk over woodland areas and guards don’t beat Celes in her cell like I remember. Our expectations have increased. Alphadia II has hardly changed at all, in fact its backpedaled on a few points.

Graphically the game is quite similar to the original, although the grid the game has been built upon is smaller meaning that we get more on screen at a time but less detail. This would be fine if it wasn’t for two unnecessary bars cropping the experience from the left and right making the overall space smaller than the original’s by some degree. I was playing the game on the 3Gs at the time and the screen space was tiny. The overall ascetic of the game hasn’t changed much at all with the same basic menus, feel for the world, locations, etc. What does seem to have is that the characters have been dulled down to an extent that they are either sad re-skins of the original cast or so generic that they are instantly forgettable. The games core cast of players is dull to look at, and that’s a problem when you’re going to be spending time with them. Battles also suffer from being smaller, meaning that the fantastic creature designs of the original are less detailed and that we get less chance to see the already drab characters scaled up in full. Some of the spell and skill effects are quite pretty, but they are nothing to write home about, being essentially your basic fire, ice, wind, etc attacks.

Sound feels unchanged from the original games for the most part, but then it wasn’t particularly broken in the first place so that is a forgivable sin. Many games including the mighty Dragon Quest series use nostalgia and build a connecting fabric between titles with recurring sounds and themes so there is no harm done there. The music is functional but forgettable immediately, leaving no lasting impression. In all honesty it’s a game you will be playing with the sound muted while you partake in a battle or two while the television keeps your attention. 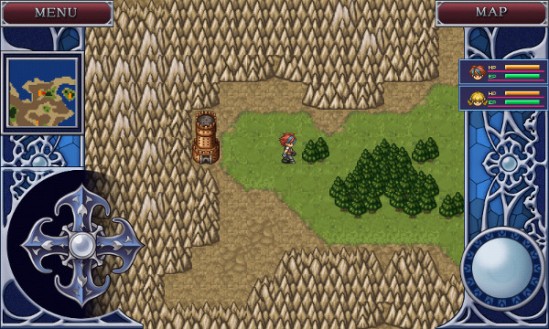 I cannot comprehend why those bars were necessary, especially since the menu shows all the data on them anyway and the mini-map is useless.

Gameplay is much the same as the original Alphadia with a couple of revisions. It’s still a traditional JRPG with all the trimmings one would expect from such, although the elemental system for weaknesses and strengths in enemies feels a little weak. Slamming lightning into a water monster should feel like a result, but the additional damage feels negligible. The rings from the first game can be charged to give each character a second element in addition to the one they represent for the game and learn automatically with leveling. Subquests have been added that see you return to the games main hub to drop one off and collect another, these usually involve speaking to somebody in a particular town, delivering an item or killing something. They are not particularly memorable and the rewards for them don’t amount to much but they do add an extra layer of content that the original lacked. The only element holding them back is that you can only have one subquest at a time and the games plot takes you far away in the opposite direction or sticks you on a different continent with no way to leave for long stretches of time, making them impossible to achieve until later in the game. The auto-battle feature I enjoyed in the original game for its easy drop-in and drop-out mechanic with battles makes a return but will never be turned off in this title because nothing offers a particularly large challange that being a level or so above them doesn’t cure. Bosses are uninspired and can be powered through by hitting them repeatedly with regular attacks.

In terms of story it is here that the biggest sins are committed for Alphadia II. The original Alphadia ended with one of the original cast sacrificing himself to save the world in a traditional genre convention (I’d say its a spoiler warning but honestly the game has been out forever now and you can see it coming a mile away). The sequel picks up 200 years later with two new characters called Leon and Milfy (yes, Milfy!) who act as our ‘in’ to the story but really its about the character of Enah, an immortal being in the body of a little girl who was a character in the original and discovers some way into the sequel that Ash may still be alive. In fact he’s kicking arse as a bad-ass hopping in and out of portals and may or may not be a villain. This premise for a sequel has real potential but it sticks the two most interesting characters and themes to the side and ignores them for most of the game, instead focusing on a ‘go here to do this’ dynamic that gets old FAST. At one point you revisit the elemental temples from the original so she can speak to them and learn more about what is happening, Leon and Milfy tag along because she needs bodyguards (although she most deffinatly doesn’t) and they walk into each temple, have a brief chat along the lines of ‘bad things are coming, be careful’ and leave again, wasting both the characters time and ours. This is shameless padding. Worse whole sections of dialogue are drawn out beyond belief by a passable translation that goes on and on without ending. Whole conversations take place where only three of four lines of relevant information can be used, meaning that this game has more spoken dialogue than a visual novel. Worse, if you skip it you will literally have no idea where you are going next or why. It’s an abject lesson in tedium built upon a story that had real honest to god potential to be great.

See that auto button? Chances are it will never be set to off.

Kemco publish a lot of JRPGs, this is a fact. They do not create these for themselves but publish from a number of different studios who otherwise wouldn’t see the light of day. Alphadia II is a game that should have been something special, the screenshots in this review don’t look bad, the original was fun and the story summary seems cool. The trouble is that every singe ounce of potential in this game is squandered away for no real reason and you’re left feeling robbed of the time you spent on it. Had this game been released sooner after the original rather than be pushed back into the Kemco schedule of releases it may have seemed more impressive from a technical standpoint, but the dialogue and wasted story elements leave a hole that can’t be covered up. It’s worth playing through once if you want a conclusion to Ash’s story from the original and you want to see how the world has changed since they took down the evil empire, but really it retreads too many themes (Energi and the original Crisis are name dropped frequently and they must be almost 500 years old by the time this sequel swings round) and doesn’t build any connection to the main characters it has. If you see it going cheap give this game a little time, otherwise avoid it.