Bioware are living the high life right now, fresh off the back of people slamming Mass Effect 3 (which we have to be honest, could never have lived up to the sheer hype the fans expected of it) they’ve knocked it out of the park with a sequel to their Dragon Age franchise that expands on just about everything seen in both the first and second games. You can imagine them pushing it out of the door on launch day, sitting down collectively on a sofa and opening a beer. Job done.

Of course Dragon Age Inquisition isn’t a perfect game. Let’s get that out of the way straight off the bat because there are some things about this game that are not right by any measure. Graphical glitches crop up at an amazing rate (I played through on a PS3 version and whilst the game was obviously built for the PS4 and its friends I did some extensive research for this article and found many of the same problems occurring across multiple platforms). There are bugs that can hide the text to stop a conversation dead when you should be choosing an answer. The sound levels are all wrong, with some people’s voices hardly a whisper over the background noises and the soundtrack, forcing me to rotate the camera like a dummy testing to see if I close in and zoom up on the speaker if it will get louder . . . I could go on, the trouble is that none of these stop you enjoying the hell out of the game. 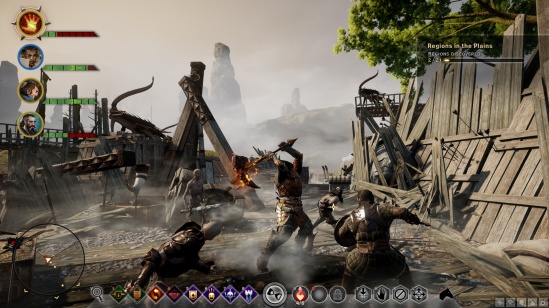 Battles flow smoothly, though if your anything like me your first few hours will be spent swearing that the game has no Healer class.

Graphically the game is a HUGE step up from Dragon Age II (which people slam but I still enjoyed for its daring to tell a three act story in one city over three years and its vibrant cast) even stripped back onto the PS3 they practically radiate quality. Character models look a little stiff sometimes but the sheer volume of editing that’s possible to every detail and the lack of reused assets between locations is something that more games should aspire to. Occasionally the lip sync is off, or it takes a little while for a texture to load but you can see that the game was built to be beautiful. Some areas are amazing to explore and even the Hinterlands (leave the F***King the Hinterlands!) have moments where you just stop and stare at the majesty of it all. Seeing your first dragon fly overhead and land in the near distance is at once both a sight to behold and an exercise in pant-wetting worry for the status of your party.

The sound effects feature a broad range, though fans will be glad to hear that familiar levelling up chord play and tingle and the possibilities it brings. Musically the game is fantastic, though the central theme shares a striking similarity to the theme from the film The Mortal Instruments: City of Bones. I mention this because I often found myself whistling the next part of the song only to realize it hadn’t happened. Voice acting is superb, with even the NPCs sounding great, though the aforementioned level of audio can put a dampener on proceedings. Star turns from Varric, Morrigan and Cassandra as well as Iron Bull make the cast feel vibrant and passionate about the script, which fills you with energy. This is one of those games where you spend as much time in your hub chatting to party members as you do exploring because you choose to, not because the game demands it.

Character customization is at an all time high, allowing you to forge items from scratch and dictate their stats, design and colour among other things.

Gameplay is slightly altered for the new installment. Instead of mashing X as you did in Dragon Age II to attack you now hold down a shoulder button, allowing for less blistered fingers but a slightly less visceral experience. You still fire off special attacks with them mapped to other keys and use radial menus to allot potions (your only way to heal!) to wounded characters. Most of the game revolves around closing portals, which requires your lead avatar to step out of the battle and spend time disrupting it or using focus abilities to clear the herd of demons they spew out. Your companions and the way the game works is largely unchanged overall, with favor being allotted by your reactions and responses to questions. People can still hook up, which will please those who come to Dragon Age for the sex, and conversation trees are wonderfully written.

The biggest new addition is the War Table, from which you send out your companions from the hub on mini-missions that take place in real time. Think of it as Lords of Waterdeep, Dragon Age edition. You check the world map and send up to three agents out at a time covering Diplomatic, Military and Spy based responses to situations. If you chose wisely then the rewards pour in. I personally got a little carried away with this early on and mined the hell out of it for everything I could get. You also open up new areas to explore from the table by paying ‘Power’ points you’ve earned from quests and from sealing portals.

Harvesting ingredients is simple, but you’ll do it automatically as you explore because ‘they’re there!’ and these can be used for just about everything from quests to creating custom armour or levelling potions. The depth to the items and creation system is almost endless and would fill an article all of its own.

I don’t want to spoil the games story, since Dragon Age has always felt like it’s almost the finest form of interactive fiction to an extent. Suffice to say that the sky is ripped open when a meeting between all the key players in the Chantry are gathered together, causing a major death toll and portals to open to the Fade all over the world. You are found at ground zero with a glowing hand and the ability to close or disrupt the portals, but there are strong voices calling for your head and nobody trusts you. From here it’s up to you to build an Inquisition, lead and army and unite a scattered world – or bring it all down around you if you’ve a mind to. The joy is always in the freedom of choice within the scripted boundries of the game.

Overall Dragon Age Inquisition is an amazing game. It would be the full 5 medals if it weren’t for the bugs on launch that hold it back. I’ll review DLC that expands the single player experience individually as they are uploaded to the Playstation Store, and although I know the game has a multiplayer mode I honestly consider it separate from the core experience to only mention it in passing. Dragon Age Inquisition closes the trilogy of PS3 Dragon Age games wonderfully and sets the stage for new adventures on new consoles with flare. Even the experience of harvesting a billion pieces of iron seems fun when it’s done as part of such an involved game.